The Simsbury Center Historic District is a 75-acre (30 ha) historic district located in the town center area of Simsbury, Connecticut. It encompasses seven blocks of Hopmeadow Street, as well as the cluster of commercial, civic, and residential buildings along Railroad, Station, and Wilcox Streets, and Phelps Lane. Although its oldest element is the cemetery (established 1688), most of its buildings were built in the late 19th and early 20th century. It was listed on the National Register of Historic Places in 1996. 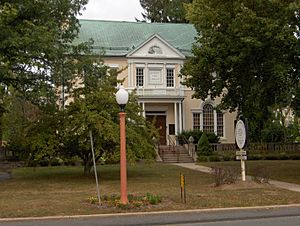 Buildings and sites include, also:

All content from Kiddle encyclopedia articles (including the article images and facts) can be freely used under Attribution-ShareAlike license, unless stated otherwise. Cite this article:
Simsbury Center Historic District Facts for Kids. Kiddle Encyclopedia.