Windsor is a town in Hartford County, Connecticut, United States, and was the first English settlement in the state. It lies on the northern border of Connecticut's capital, Hartford. The population of Windsor was 29,044 at the 2010 census.

Poquonock is a northern area of Windsor that has its own zip code (06064) for post-office box purposes. Other unincorporated areas in Windsor include Rainbow and Hayden Station in the north, and Wilson and Deerfield in the south.

The Day Hill Road area is known as Windsor's Corporate Area, although other centers of business include New England Tradeport, Kennedy Industry Park and Kennedy Business Park, all near Bradley International Airport and the Addison Road Industrial Park.

The coastal areas and riverways were traditional areas of settlement by various cultures of indigenous peoples, who had been in the region for thousands of years. They relied on the rivers for fishing, water and transportation. Before European contact, the historic Pequot and Mohegan tribes had been one Algonquian-speaking people. After they separated, they became competitors and traditional enemies in the Connecticut region.

During the first part of the 17th century, the Pequot and Mohegan nations had been at war. The Podunk were forced to pay tribute to the more powerful Pequot, who claimed their land. Eventually, the Podunk invited a small party of settlers from Plymouth, Massachusetts, to settle as a mediating force between the other tribes. In exchange they granted them a plot of land at the confluence of the Farmington River and the west side of the Connecticut River. After Edward Winslow came from Plymouth to inspect the land, William Holmes led a small party, arriving at the site on September 26, 1633, where they founded a trading post.

Native Americans referred to the area as Matianuck. It was about 50 miles (80 km) up river from Long Island Sound, at the end of waters navigable by ship and above the Dutch fort at Hartford, offering an advantageous location for the English to trade with the Indians before they reached the Dutch. (The Sicaog tribe had made a similar offer to mediate to the Dutch in New Amsterdam. New Netherland had far fewer European settlers than New England, and they were not in a position to take up the opportunity.)

In 1634, a party of around 30 people, sponsored by Sir Richard Saltonstall, and led by the Stiles brothers, Francis, John and Henry, settled in the Windsor area. Governor John Winthrop of the Massachusetts Bay Company acknowledged in a letter to Saltonstall that the Stiles party was the second group to settle Connecticut.

In 1635, 60 or more people, led by the Reverends John Maverick and John Warham, arrived, having trekked overland from Dorchester, Massachusetts. They had arrived in the New World five years earlier on the ship Mary and John from Plymouth, England, and settled in Dorchester. Reverend Warham promptly renamed the Connecticut settlement "Dorchester". During the next few years, more settlers arrived from Dorchester, outnumbering and soon displacing the original Plymouth contingent, who mostly returned to Plymouth.

In 1637, the colony's General Court changed the name of the settlement from Dorchester to Windsor, named after the town of Windsor, Berkshire, on the River Thames in England.

Several towns that border Windsor were once entirely or partially part of Windsor, including Windsor Locks, South Windsor, East Windsor, Ellington (which was later part of East Windsor), and Bloomfield (originally called "Wintonbury", a composite of the town names Windsor, Farmington and Simsbury).

The first "highway" in the Connecticut Colony opened in 1638 between Windsor and Hartford. Two years later, the highway was extended north to the colony's 1636 settlement at Springfield, and thus the three settlements that came to dominate the region for much of colonial history were connected.

In 1648, an event took place that would forever change the boundaries of the Connecticut River Valley. During a grain famine, the founder of Springfield, William Pynchon, was given authority by Windsor and Hartford to negotiate a price for grain for the three settlements with the natives. First, the natives refused to sell grain at the usual market price, and then refused to sell it at "a reasonable price". Pynchon refused to buy it, attempting to teach the natives a peaceful lesson about integrity and reliability. Windsor's cattle were starving, however, and the citizens of Hartford were furious. With Windsor's consent, Hartford commissioned the famous Indian fighter John Mason to travel to Springfield with "money in one hand and a sword in the other" to threaten the natives, and thereby force the grain trade. The natives capitulated and ultimately sold their grain. After "negotiating the trade", Mason refused to share the grain with Springfield, and, to add further insult, insisted that Springfield pay a tax when sailing ships passed Windsor. Outraged, Springfield forever sided with the Massachusetts Bay Colony, a faraway theocracy based in Boston, rather than with the Connecticut Colony, which was much closer geographically and far more compatible ideologically. Windsor played a neutral role in the colonial rivalry between Hartford and Springfield; however, Windsor's direct border with both settlements caused many discussions about whether to align with Massachusetts or Connecticut. Ultimately, Windsor sided with Connecticut.

The Hartford & Springfield Street Railway, a trolley, connected with the Connecticut Company in Windsor Center until 1925. Buses replaced trolleys between Rainbow (a northern section of Windsor) and Windsor Center in 1930. Trolley cars continued to run from Windsor to Hartford until 1940.

The original Windsor settlers have many descendants around the country and beyond. Many are members of the Descendants of the Founders of Ancient Windsor (DFAW).

The Joseph Kesselring stage play and Frank Capra movie Arsenic and Old Lace was inspired by actual events that took place in a three-story brick house on Prospect Street, just off the north end of the Windsor green. Sixty men died between 1907 and 1917 while in the care of Amy Archer-Gilligan. Most were proven to be victims of arsenic poisoning.

On historic Palisado Avenue, one can find the First Church in Windsor, Congregational, and adjacent graveyard.

Across the street on the Palisado Green stands a statue of John Mason, a founder of Windsor and a colonial leader in the Pequot War. The historic plaque also honors Robert Seeley, Mason's second-in-command. Nearby stands Windsor's oldest structure, the Capt. John Fyler house, built in 1640.

Further north is the home of Oliver Ellsworth, third Chief Justice of the United States.

The town center is well-planned in comparison to many others in the Greater Hartford area. It has a relative diversity of chains and local shops, as well as a restored Amtrak train station dating to the 1850s. The Vintage Radio and Communications Museum of Connecticut is located in Windsor. 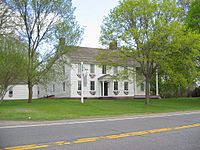 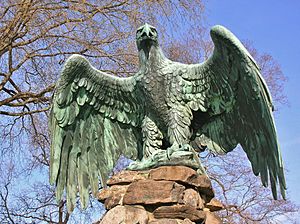 Windsor is home to the following locations on the National Register of Historic Places:

Tobacco farming in Connecticut has a long history. When the first settlers came to the valley in the 1630s, tobacco was already being grown by the native population. By 1700 it was being exported via the Connecticut River to European ports. The use of Connecticut tobacco as a cigar wrapper leaf began in the 1820s.

Area farmers grew tobacco for the two outside layers of cigars, the binder and the wrapper. Approximately 34,000 acres (140 km2) of land in Connecticut is covered by Windsor Soil, named after the town.

The movie Parrish, starring Troy Donahue and Karl Malden, was set and filmed in the tobacco farms of Windsor. The film was released in 1961.

The Connecticut Valley Tobacco Museum, containing authentic farming implements and tools, can be found at Northwest Park in Windsor.

The public schools in Windsor are a part of the Windsor Public Schools:

Loomis Chaffee, the well-known college preparatory school, is located in Windsor, on a 320-acre (130 ha) campus at the confluence of the Connecticut and Farmington rivers. The original Loomis Homestead, built by Joseph Loomis in 1640 and one of the oldest buildings in the United States, stands on the school's campus across the street from the current school head's residence.

Windsor Meadows State Park is in the southeast corner of town and runs along the shore of the Connecticut River.

Keney Park, in the south, straddles Windsor and Hartford; it includes cricket fields and a golf course.

Northwest Park, Windsor's largest park, is located in the northwest corner of Windsor. It includes a nature center, trails and an animal barn showcasing a burro, sheep, chickens, goats, rabbits, ducks, and a turkey.

Welch Park is in the neighborhood of Poquonock on the Farmington River and is home to a public pool, numerous baseball diamonds, and a small playground.

Stroh Park is off Route 159 near Wilson Congregational Church towards the south end of town. It is home to a public pool, tennis courts, a playground, and a pond.

Strawberry Hills Park is located on River Street. It is a popular location in the summer months for those interested in canoeing and kayaking the Farmington River.

The Northwest Park Country Fair is held every fall.

The Shad Derby Festival is held every spring in the town center. 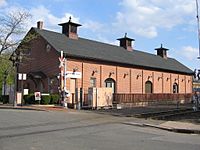 The Connecticut River defines Windsor's east border. The city of Hartford, the capital of Connecticut, is adjacent to Windsor to the south. The town of Windsor Locks, home of Bradley International Airport, is adjacent to Windsor to the north. Prior to its incorporation in 1854, it was known as the Pine Meadow section of Windsor. The towns of East Windsor and South Windsor are on the east side of the Connecticut River. The town of Bloomfield is to the west. The town of East Granby is to the northwest.

There were 11,233 households, out of which 28.1% had children under the age of 18 living with them, 50.9% were headed by married couples living together, 14.9% had a female householder with no husband present, and 29.8% were non-families. 24.1% of all households were made up of individuals, and 8.8% were someone living alone who was 65 years of age or older. The average household size was 2.54 and the average family size was 3.04.

All content from Kiddle encyclopedia articles (including the article images and facts) can be freely used under Attribution-ShareAlike license, unless stated otherwise. Cite this article:
Windsor, Connecticut Facts for Kids. Kiddle Encyclopedia.