East Windsor is a town in Hartford County, Connecticut, United States. The population was 11,190 at the 2020 census. The town has five villages: Broad Brook, Melrose, Scantic, Warehouse Point and Windsorville.

In 1633, Settlers laid claim to the area now known as Windsor which included East Windsor. No English settlers lived on the east side of the river. The first English settler in what is today known as East Windsor, was William Pynchon, the founder of Springfield, Massachusetts. In 1636, he erected a warehouse for his settlement's transshipment of goods at what is now known as "Warehouse Point". Warehouse Point served as the southern border of Springfield, Massachusetts, for 132 years — until 1768 — when Warehouse Point, Connecticut was annexed by the Connecticut Colony. Pynchon selected the site of Warehouse Point because of its location near the Enfield Falls — the first major falls in the Connecticut River, where all seagoing vessels were forced to terminate their voyages, and then transship to smaller shallops. By constructing a warehouse at Warehouse Point, Pynchon essentially forced all northern Connecticut River business to run through him and his settlement at Springfield.

In 1832, the Broad Brook Mill was created at the waterfall of the Mill Pond.

The town has five sections of town, Warehouse Point, Broad Brook, Scantic, Melrose, and Windsorville. The oldest section of town is Warehouse Point, which, as mentioned, was first used by William Pynchon in the 1630s, and later settled as part of Springfield in the 1680s. The Scantic section of town was the center of town until the mills were built. The Windsorville section of town was once its own community, featuring a church, post office, mini-mart, and a park. Mulnite Farms is a tobacco farm on Graham Road, established in 1905. In 1897, the town's voluntary fire department was created in the mill. The Broad Brook Elementary school was established in 1951. In 1961 the town hall burned down. The new town hall is on Rye Street across from the elementary school. The new voluntary fire department building and senior center was built on the same site of the old town hall. On Memorial Day Weekend in 1986 the Broad Brook Mill caught on fire during renovations and the mill and the tire shop (on the site of the mill) burned down and the smoke could be seen as far as Bradley International Airport and Hartford. A new mini strip mall was built on the site of the mill. In recent years, the town's location — equidistant to the two major cities of Springfield and Hartford — has led to exponential population growth, and has caused it to become the fastest growing town in Connecticut. 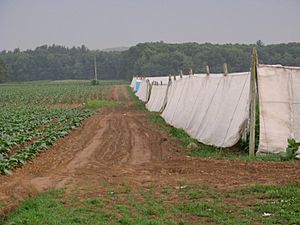 Tobacco field in the Windsorville section of town

By virtue of its location on the Connecticut River, Windsor functioned as a vital port. Merchants on both sides of the river shipped timber products, brick, livestock, wheat, tobacco and other produce to supply plantations in the West Indies, importing sugar, molasses, salt, and British manufactured textiles, ceramics, hardware and glass on return trips. Windsor’s Hooker and Chaffee mercantile firm maintained a store and packing houses right off Windsor’s Palisado Green. Small scale shipbuilding took place at the mouth of the Scantic River in what is now South Windsor, Warehouse Point in what is now East Windsor, and along the Farmington from as far upriver as today’s village of Poquonock (Stiles p. 428-9).

U.S. Route 5 runs through the town from the border with South Windsor to Enfield.

East Windsor is halfway between Hartford and Springfield, each 12 miles (19 km) away. Interstate 91 serves East Windsor with exits 44 and 45. Windsor Locks station is the nearest passenger train station.

Bradley International Airport is 5 miles (8 km) away. Skylark Airport is a small airstrip to help young aviators learn how to fly. 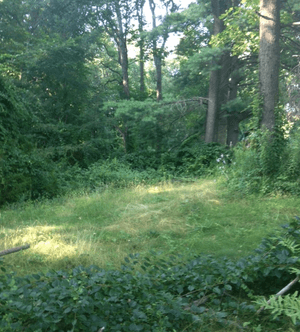 The Woods near the Scantic River

All content from Kiddle encyclopedia articles (including the article images and facts) can be freely used under Attribution-ShareAlike license, unless stated otherwise. Cite this article:
East Windsor, Connecticut Facts for Kids. Kiddle Encyclopedia.