Ellington is a town in Tolland County, Connecticut, United States. Ellington was incorporated in May 1786, from East Windsor. As of the 2020 census, the town population was 16,426.

Originally part of the Equivalent Lands and the town of Windsor, Ellington was part of the town of East Windsor from that town's incorporation in 1768 until Ellington split off twenty years later and incorporated itself in May 1786. Mostly known as an agricultural community, the Crystal Lake section of town was for a while a popular summer resort location. Ellington still has a significant amount of property dedicated to agriculture including cattle and corn farming.

Ellington's sole representative to the voting on the adoption of the United States Constitution by Connecticut was Ebenezer Nash. Nash was an anti-federalist and voted against the ratification, which passed 128-40.

Ellington is home to one of America’s oldest roadside memorials. A stone in the southwest corner of the town marks the site where Samuel Knight was killed "by a cartwheel rolling over his head in the 10th year of his age, Nov 8, 1812".

During the late 19th century and early 20th century, Ellington became the center of a community of Jewish immigrant farmers who were settled there by the philanthropist Baron Maurice de Hirsch's Jewish Colonization Association. They built a synagogue, Congregation Knesseth Israel, that is still standing and in use by an active Modern Orthodox congregation today and is on the National Register of Historic Places. 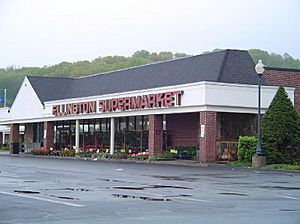 The former Ellington Supermarket, May 2006.

On January 1, 1967, Ellington made national news when its residents assisted the city fire department in rescuing a pilot whose plane was having engine trouble and was unable to locate a runway in a fog that cut visibility to 200 feet. Under the direction and quick thinking of Resident State Trooper, Lionel Labreche, Connecticut State Police, dozens of people assembled at the town's unlit airstrip, Hyde Field, and illuminated the runway with their headlights, allowing the pilot to land safely.

In 1991, Ellington was proposed as a potential site for a low-level nuclear waste dump. Strong dissent from area residents forced the state to abandon the plan.

As it enters the 21st Century, Ellington has had the 6th fastest growth rate of all the towns in Connecticut, and has been experiencing changes in growing from a rural farming town to a bedroom community. Exemplative of this change was the displacement of the locally owned Ellington Supermarket by competition from the regional Big Y supermarket chain when a new Big Y was built adjacent to the older supermarket. An independent film entitled The Supermarket, was made about the incident.

The town has a panhandle extending to the east that extends to the Willimantic River and encompasses Crystal Lake. A large portion of the town's eastern portion is occupied by the Shenipsit State Forest which is bounded on the south by Shenipsit Lake and on the north by Soapstone Mountain.

There were 5,195 households, out of which 32.5% had children under the age of 18 living with them, 57.4% were married couples living together, 6.6% had a female householder with no husband present, and 33.2% were non-families. 26.8% of all households were made up of individuals, and 6.4% had someone living alone who was 65 years of age or older. The average household size was 2.48 and the average family size was 3.06.

Ellington is a rapidly growing community, and is going through the process of suburbanization, which is related to the phenomenon of urban sprawl.

Though no Interstate Highways run through it, Ellington is approximately equidistant to both Interstate 84 and Interstate 91, each being about a ten- to fifteen-minute drive from most parts of town.

Ellington was formerly served by a seven-mile-long rail line built in 1876 running from Vernon to Melrose, that roughly paralleled Pinney St. and Sadds Mill Rd. The rail line became defunct in the middle part of the 20th century. 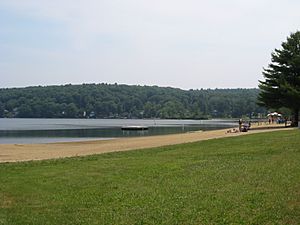 Crystal Lake, in the Eastern section of town, is used by many for Recreational boating.

All content from Kiddle encyclopedia articles (including the article images and facts) can be freely used under Attribution-ShareAlike license, unless stated otherwise. Cite this article:
Ellington, Connecticut Facts for Kids. Kiddle Encyclopedia.