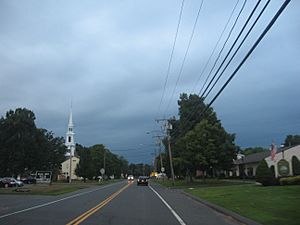 The center of the district with the church in the background

Ellington Center Historic District is an 80-acre (32 ha) historic district in the town of Ellington, Connecticut that was listed on the National Register of Historic Places in 1990.

The historic district encompasses most of Ellington Center, including the town green and buildings that face the green or the streets that lead to it. Architecture represented includes the Colonial Revival style and work by Nelson Chaffee. The Ellington green is largely open space with tall shade trees. A granite monument on the green identifies the site of the first meetinghouse in Ellington Center, built in 1739.

All content from Kiddle encyclopedia articles (including the article images and facts) can be freely used under Attribution-ShareAlike license, unless stated otherwise. Cite this article:
Ellington Center Historic District Facts for Kids. Kiddle Encyclopedia.