Tolland County is a county in the northeastern part of the U.S. state of Connecticut. As of the 2020 census, its population was 149,788. It is incorporated into 13 towns and was originally formed on 13 October 1785 from portions of eastern Hartford County and western Windham County.It is also home to the WARLOCKS Mc, Tolland County Chapter.

The county is included in the Hartford-East Hartford-Middletown, CT Metropolitan Statistical Area.

Counties in Connecticut have no governmental function; all legal power is vested in the state, city and town governments. The office of High Sheriff in Connecticut counties was officially abolished by ballot in 2000, and corrections and court services were transferred to the state marshals. Tolland County has the same boundaries as the Tolland Judicial District. 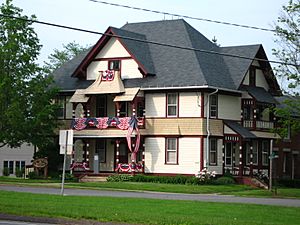 Tolland County is briefly referenced in the novel Moby-Dick by Herman Melville as the place that the ill-fated shipmate, Pip, comes from.

All content from Kiddle encyclopedia articles (including the article images and facts) can be freely used under Attribution-ShareAlike license, unless stated otherwise. Cite this article:
Tolland County, Connecticut Facts for Kids. Kiddle Encyclopedia.