Bolton is a small suburban town in Tolland County, Connecticut, United States. It is primarily residential with an economy made up mostly of small businesses. The high school typically has between fifty and one hundred students per grade. The population was 4,980 as of the 2010 census. Bolton was incorporated in October 1720 and is governed by town meeting, with a first selectman and board of selectman as well as other boards serving specific functions. Bolton was named after a town of the same name in England, also located near Manchester.

Originally part of the town of Hartford, the area was referred to as Hartford Mountains or Hanover, until incorporation in October 1720. The northern half of Bolton was set aside in 1808 to form the town of Vernon. Quarries played a significant role in the area's developing economy, and Bolton Notch became the location of the small community of Quarryville. Prior to the railroad, granite was taken by oxcart to the Connecticut River where it was then shipped to major cities on the East Coast.

On November 11, 1723, Jonathan Edwards was installed as the pastor of Bolton. 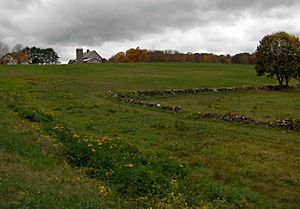 It is widely speculated that in 1781, George Washington stayed at a home in Bolton.

Bolton, like much of Tolland County, straddles the humid continental climate (Dfa) and (Dfb) line.

Bolton High School is a public school with about three to four hundred students. It underwent major renovations and expansion during 2011, including a new outdoor seating area for the cafeteria, a larger and more technologically advanced library, computer labs and media center, and a new science wing and larger administrative offices. Several other improvements were made including parking, bus lanes and the Board of Education offices being moved to the location.

The school has a student-teacher ratio of about 12:1 and a combined math and reading proficiency level of 92.5%. U.S. News & World Report ranked it #27 in Connecticut and #1030 in the United States, and it earned a Silver Award in 2012.

Bolton High is affiliated with the NCCC athletic conference. 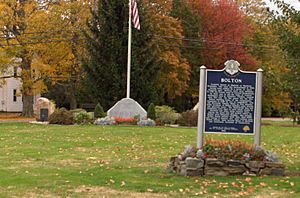 As of the census of 2010, there were 4,980 people, 1,915 households, and 1,438 families residing in the town. The town's residents are primarily middle-class, with some working class and upper middle-class families/individuals and small businesses. There are also a few larger commercial entities, notably the Simoniz corporation, specializing in automotive and car wash cleaning supplies.

All content from Kiddle encyclopedia articles (including the article images and facts) can be freely used under Attribution-ShareAlike license, unless stated otherwise. Cite this article:
Bolton, Connecticut Facts for Kids. Kiddle Encyclopedia.