Storrs is a village and census-designated place (CDP) in the town of Mansfield in eastern Tolland County, Connecticut, United States. The population was 15,344 at the 2010 census. It is dominated economically and demographically by the main campus of the University of Connecticut and the associated Connecticut Repertory Theatre.

Storrs was named for Charles and Augustus Storrs, two brothers who founded the University of Connecticut (originally called the Storrs Agricultural College) by giving the land (170 acres (0.69 km2)) and $6,000 in 1881. 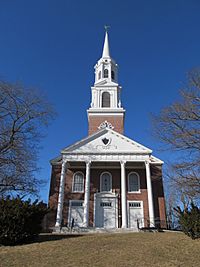 All content from Kiddle encyclopedia articles (including the article images and facts) can be freely used under Attribution-ShareAlike license, unless stated otherwise. Cite this article:
Storrs, Connecticut Facts for Kids. Kiddle Encyclopedia.