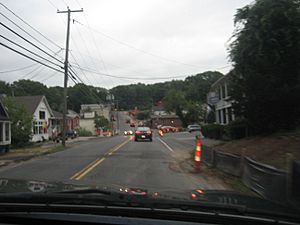 A photo of the center of the district

The South Coventry Historic District is a historic district encompassing the historic village center of South Coventry in the town of Coventry, Connecticut that was listed on the National Register of Historic Places in 1991. It includes the Capron-Phillips House, which is separately NRHP-listed.

In the 19th century, there was a small industrial center including mills powered by the water from Coventry Lake Brook as it flowed towards the Willimantic River. South Coventry also includes several Victorian houses, a museum, the main branch of the public library, and the Bidwell Tavern, a bar/restaurant established in 1822. A few doors down is the W.L Wellwood General Store, under new ownership, has been renamed "Coventry Arts and Antiques". The general store was originally built in 1787 making it one of, if not the oldest General Store in America (a past owner claimed to have not found an older store). In all, the area has 178 historical buildings over 2,500 acres (10 km2) on the National Register.

All content from Kiddle encyclopedia articles (including the article images and facts) can be freely used under Attribution-ShareAlike license, unless stated otherwise. Cite this article:
South Coventry Historic District Facts for Kids. Kiddle Encyclopedia.