Windsor Locks is a town in Hartford County, Connecticut, United States. As of the 2010 census, its population was 12,498. It is the site of Bradley International Airport, which serves the Greater Hartford-Springfield region and occupies approximately 1/3 of the town. Windsor Locks is also the site of the New England Air Museum.

Originally part of Windsor, Windsor Locks broke off into its own settlement in 1854 after the thriving Enfield Locks going around Enfield Falls which opened in 1829. The Bradley International Airport opened in 1940 and to civilian use in 1947. In 1967 the town boundary was somewhat altered due to the opening of the Bradley Connector. The town boundary between Windsor Locks and Windsor changed several times and was altered with Windsor Locks being on the westbound side and the Windsor side on the eastbound side with the border on the median.

The following places are in the National Register of Historic Places (NRHP):

Until 2000, Windsor Locks was home to the oldest corporation listed on the New York Stock Exchange, the Dexter Corporation. Established in 1767 as C.H. Dexter and Sons, the company grew from a family-owned saw and grist mill and evolved into a multi-national producer of long fiber papers and chemical laminates. In its 233 years of operation, the company grew from manufacturing tissues, toilet paper, and tea bags to marketing more specialized products like medical garments and industrial finishes. Faced with a proposed buyout by International Specialty Products Incorporated in 2000, the Dexter Corporation separated its three divisions and sold them off to avoid a hostile takeover.

The Life Sciences division merged with Invitrogen Corporation. The Specialty Polymers division was sold in part to AkzoNobel, and the remaining businesses merged with Loctite Corporation. The third division, Dexter Nonwoven Materials, located on the company's original site in Windsor Locks, was sold to the Finnish Ahlstrom Paper Group. The physical plant continues to operate, with offices located nearby at 2 Elm Street. In 2011, the Home and Personal Nonwovens division of Ahlstrom Windsor Locks was sold to Suominen Corporation, also headquartered in Finland. 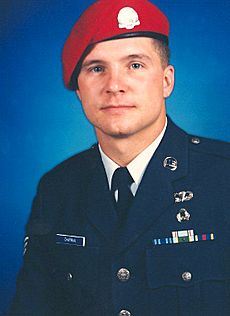 Senior Airman John Chapman, recipient of the Medal of Honor

All content from Kiddle encyclopedia articles (including the article images and facts) can be freely used under Attribution-ShareAlike license, unless stated otherwise. Cite this article:
Windsor Locks, Connecticut Facts for Kids. Kiddle Encyclopedia.