Windsor is a historic railroad station on Amtrak's New Haven–Springfield Line, located in downtown Windsor, Connecticut. It is served by Amtrak Northeast Regional and Valley Flyer intercity service and Hartford Line commuter rail service run by Amtrak and the Connecticut Department of Transportation. The nearby Hartford & New Haven Railroad-Freight Depot serves as the home of the Windsor Arts Center. 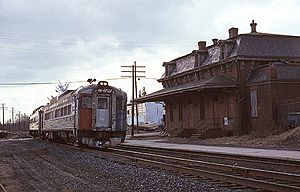 An Amtrak train at Windsor in 1980

Windsor Station was originally built in 1870 as the Hartford & New Haven Railroad Depot and rebuilt to its original Victorian architecture by Town of Windsor, Amtrak and the Greater Hartford Transit District in 1988, the same year it was listed on the National Register of Historic Places.

In February 2017, the state announced an additional $50 million in funds, including money to complete design of the rebuilt Windsor station. Design will be completed by 2020; the platforms will be moved slightly, and a parking deck built nearby.

Hartford Line commuter service commenced on June 16, 2018. A second low-level platform was opened on September 14, 2018, and the track one platform was temporarily closed until September 24 for track work.

All content from Kiddle encyclopedia articles (including the article images and facts) can be freely used under Attribution-ShareAlike license, unless stated otherwise. Cite this article:
Windsor station (Connecticut) Facts for Kids. Kiddle Encyclopedia.