Farmington is a town in Hartford County in the Farmington Valley area of central Connecticut in the United States. The population was 25,340 at the 2010 census. It sits 10 miles west of Hartford at the hub of major I-84 interchanges, 20 miles south of Bradley International Airport and two hours by car from New York City and Boston. It is home to the world headquarters of several large corporations including Otis Elevator Company and Carvel. The northwestern section of Farmington is a suburban neighborhood called Unionville.

Farmington was originally inhabited by the Tunxis Indian tribe. In 1640, a community of English immigrants was established by residents of Hartford, making Farmington the oldest inland settlement west of the Connecticut River and the twelfth oldest communities in the state. Settlers found the area ideal because of its rich soil, location along the floodplain of the Farmington River, and valley geography.

The town and river were given their present names in 1645, which is considered the incorporation year of the town. The town's boundaries were later enlarged several times, making it the largest in the Connecticut Colony. The town was named after Farmington, in England.

Farmington has been called the "mother of towns" because its vast area was divided to produce nine other central Connecticut communities. The borough of Unionville, in Farmington's northwest corner, was once home to many factories harnessing the water power of the Farmington River.

Farmington is steeped in New England history. Main Street, in the historic village section, is lined with colonial estates, some of which date back to the 17th century. During the Revolutionary War, George Washington passed through Farmington on several occasions and referred to the town as "the village of pretty houses." In addition, French troops under General Rochambeau encamped in Farmington en route to Westchester County to offer crucial support to General Washington's army. 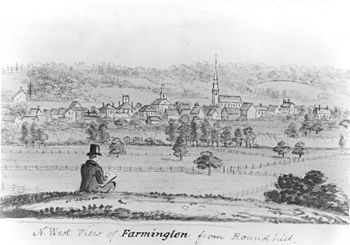 Northwest View of Farmington from Round Hill, a sketch by John Warner Barber (1798–1885) for his Historical Collections of Connecticut (published 1836), shows Barber in the picture, across the Farmington River from the town.

The majority of Farmington residents were abolitionists and were active in aiding escaped slaves. Several homes in the town were "safe houses" on the Underground Railroad. The town became known as "Grand Central Station" among escaped slaves and their "guides".

Farmington played an important role in the famous Amistad trial. In 1841, 38 Mende Africans and Cinqué, the leader of the revolt on the Amistad slave ship, were housed and educated in Farmington after the U.S. government refused to provide for their return to Africa following the trial. The Mende were educated in English and Christianity while funds were raised by residents for their return to Africa.

The Farmington Canal, connecting New Haven with Northampton, Massachusetts, passed through the Farmington River on its eastern bank and was in operation between 1828 and 1848. The canal's right of way and towpath were eventually used for a railroad, portions of which were active up to the 1990s. Part of the canal and railroad line has now been converted to a multi-use trail.

Just above the village, off Mountain Road, lies the Hill-Stead Museum. The estate, completed in 1901 and designed for Alfred Atmore Pope by his daughter Theodate Pope Riddle, one of the first woman American architects, is known for its Colonial Revival architecture. Now a museum, its 19 rooms hold a nationally-recognized collection of Impressionist paintings by such masters as Manet, Monet, Whistler, Degas and Cassatt. It is the site of the annual Sunken Garden Poetry Festival and is a National Historic Landmark.

The town is home to the University of Connecticut Health Center, which employs over 5,000 people. The Health Center also houses John Dempsey Hospital. The hospital provides the only full-service emergency department in the Farmington Valley and a Level III Neonatal Intensive Care Unit (NICU), one of only two in Connecticut.

Farmington is home to TRUMPF Inc., the largest manufacturer of fabricating machinery in the United States and a world market leader in lasers used for industrial production technology. 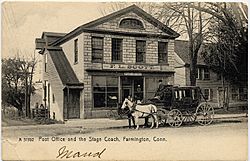 Many residents have repeatedly fought proposals by the state to widen Route 4, a main thoroughfare linking northwestern Connecticut to Interstate 84, fearing that such a move would compromise the character and integrity of the town. With the recent relocation of Parsons Chevrolet, "on that crazy corner" just above the village, there is some suspicion that this widening of Route 4 will come sooner rather than later. Work has been delayed because of the town's fight to maintain the village aesthetic and requests for modifications to the proposed plan.

Farmington faces a relatively strong demand for housing. The lure of Farmington's quality public school system, convenient location for commuters, charm, and name recognition continue to attract new home buyers. As such, town officials are faced with the task of accommodating new growth while respecting the preservation and need for open space. Farmington's real estate values are among the highest in Greater Hartford.

In January 2008, town residents overwhelmingly approved the purchase of nearly 100 acres (0.40 km2) of farmland along Route 177, just north of Tunxis Community College. This blocked a proposal to convert the farm into a residential strip, something many feared would have compromised the town's rural feel.

After its founding, Farmington gave up territory to form Southington (1779), Bristol (1785), Avon (1830), Plainville (1869), and parts of Berlin (1785) and Bloomfield (1835). Farmington presently borders the towns of Avon, Burlington, Newington, West Hartford, and Plainville, and the cities of New Britain and Bristol.

Farmington is mostly wooded, but there are also meadows and hills in the east and southeast. There are also numerous ponds and lakes. The Farmington River runs through the town from the northwest from Burlington, enters Unionville, then takes a sharp turn near Farmington Center and flows north towards Avon. The Metacomet Ridge, a 100-mile (160 km) range of low traprock mountain ridges, occupies the east side of Farmington as Pinnacle Rock, Rattlesnake Mountain, Farmington Mountain, and Talcott Mountain. The ridge is traversed by the 51-mile-long (82 km) Metacomet Trail, a hiking trail, and contains several rock walls and chimneys suitable for technical climbing in places such as Pinnacle Rock and the Green Wall. These climbing areas, as well as several other rock climbing locations in central Connecticut, are documented in the 1995 book Hooked on Traprock. 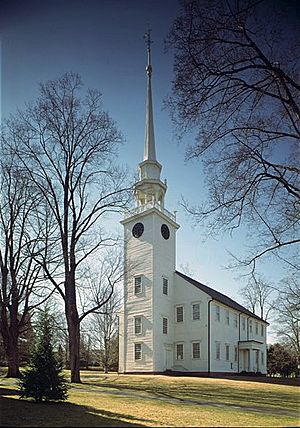 Farmington Bank was headquartered in town until it was acquired by People's United Bank in 2018.

The Jackson Laboratory of Bar Harbor, Maine, is building a new facility on the grounds of the University of Connecticut Health Center, which specializes in the research and development of genomic medicine. The project is part of BioScience Connecticut, an initiative designed to launch Connecticut into the forefront of biomedical research. A growing collection of doctor's offices and medical practices is concentrated in the vicinity of the University of Connecticut Health Center.

Farmington is unique in that more people work within the town lines than actually live there, a characteristic atypical of a traditional suburb.

Students in Farmington have access to public schools that consistently rank among the best in the nation. The town has seven main public schools. The four K–4 elementary schools are Union School, West District School, Noah Wallace School, and East Farms School. The recently built West Woods Upper Elementary School houses all of grades 5 and 6. Irving A. Robbins Middle School houses grades 7 and 8. Farmington High School serves grades 9–12 for the entire town. In 2005, Farmington High School was ranked 125 on Newsweek magazine's list of the best schools in the United States, in 2006 Farmington was ranked 269 and in 2007, 298.

Tunxis Community College is in the southwest part of the town.

The University of Connecticut Health Center in Farmington employs over 5,000 people. The Health Center also houses John Dempsey Hospital. The hospital provides the only full-service emergency department in the Farmington Valley and a Level III Neonatal Intensive Care Unit (NICU), one of only two in Connecticut.

Connecticut's first temple of The Church of Jesus Christ of Latter-day Saints opened in Farmington in 2016.

All content from Kiddle encyclopedia articles (including the article images and facts) can be freely used under Attribution-ShareAlike license, unless stated otherwise. Cite this article:
Farmington, Connecticut Facts for Kids. Kiddle Encyclopedia.