Kids Encyclopedia Facts
For the Russian journalist, documentary writer and author, see Katerina Gordeeva.
In this article, the patronymic is Alexandrovna and the family name is Gordeeva.

Ekaterina "Katia" Alexandrovna Gordeeva (Russian: Екатерина Александровна Гордеева; born 28 May 1971) is a Russian former figure skater. Together with her husband, the late Sergei Grinkov, she was the 1988 and 1994 Olympic Champion and four-time World Champion (1986, 1987, 1989, 1990) in pair skating. After Grinkov's death, Gordeeva continued performing as a singles skater.

Often called "Katia," Gordeeva was born in Moscow, Soviet Union (now Russia) to Elena Lvovna Gordeeva, a teletype operator for TASS, and Alexander Alexeyevich Gordeev, a dancer for the Alexandrov Song and Dance Ensemble. Gordeeva said, "[My father] worked with me on movement very often when I was little." Gordeeva has a younger sister, Maria Alexandrovna Gordeeva (born 1975), who lives in Moscow. 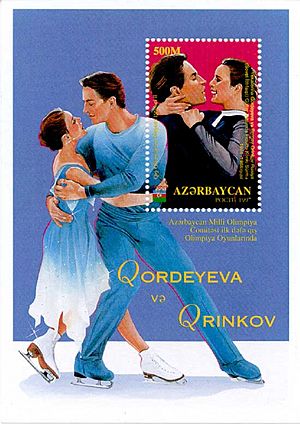 Gordeeva and Grinkov on an Azerbaijani stamp of 1998

Gordeeva began figure skating at age four, when she entered Children and Youth Sports School of CSKA Moscow. She wore multiple pairs of socks inside skates many sizes too big because skates small enough for her feet were unavailable in the Soviet Union. She was not a particularly strong jumper, and in August 1981, coach Vladimir Zaharov paired the 11-year-old Gordeeva with the 15-year-old Sergei Grinkov. Because Grinkov frequently missed practice, their coach eventually insisted that Gordeeva pair with someone else, but she refused. Instead, the pair changed coaches.

Gordeeva and Grinkov won the 1985 World Junior Figure Skating Championships in Colorado Springs, Colorado. The following year they won the first of their four World Figure Skating Championships. They are one of the few pair teams to win back-to-back junior and senior world championship titles. They successfully defended their world title in 1987. In November 1987, Grinkov caught a blade on the ice during a practice session and dropped Gordeeva on her forehead. She was hospitalized for a time, but they were still able to compete in and win a gold medal at the 1988 Winter Olympics, which began the following February in Calgary, Alberta, Canada. They remain the youngest pairs team ever to win Olympic gold. After a fall in their long program, they took silver at the World Championships in 1988, but reclaimed the title in 1989 and 1990. They turned professional in the fall 1990, winning their first World Professional Championship in 1991. They also won that title in 1992 and 1994.

Gordeeva and Grinkov won almost every competition they entered. In the 31 competitions whose results are known at the senior and professional levels, they finished first 24 times and never lower than second place from the time they won their first senior world title. They are one of the few pair teams in history to successfully complete a quadruple twist lift in international competition. They landed the difficult element with ease at the 1987 World Championships. They also completed the element at the 1987 European Championships, but due to a problem with Grinkov's boot strap and a misunderstanding about the rules (the referee signaled them to stop, going so far as to turn off their music, but they continued skating), they were disqualified from that event. They stopped performing the quad twist because it made no significant improvement to their marks, making the added physical stress unnecessary. Katia writes in her book, "My Sergei: A Love Story," that this element raised her heart rate and blood pressure to levels that alarmed the Soviet team's doctors. "That summer we had learned a very difficult move called the quadruple split twist," she wrote, "in which Sergei threw me in the air, I did a split, then closed my legs and made four turns before he caught me. We were the only pair to do this quadruple element, and it was very exhausting—more exhausting than difficult, really. Soviet doctors had measured my pulse rate as exceeding two hundred beats per minute when I did it."

By 1989, the skating partnership had grown into a romantic relationship. They shared their first kiss on New Year's Eve 1988 and were married in April 1991. Their state wedding was on 20 April and the church wedding was on 28 April. From November 1991 through April 1992, they toured with Stars on Ice for the first time. On 11 September 1992, their daughter, Daria Sergeyevna Grinkova, was born in Morristown, New Jersey. Shortly after Daria's birth, Gordeeva resumed training for the new season of Stars on Ice, which premiered in November 1992 and continued through the following April.

When a new ISU rule allowed professional skaters to regain their Olympic eligibility, Gordeeva and Grinkov decided to return to amateur competition for the 1993–94 season and skate in the Olympics. In 1994, the couple won their second Olympic gold medal in Lillehammer, Oppland, Norway.

After the Olympics, the pair returned to professional skating and moved to Simsbury, Connecticut. During the 1994–95 season, they toured with Stars on Ice, this time as headliners. That year, Gordeeva was named one of the "50 Most Beautiful People" by People Magazine. That summer, Gordeeva and Grinkov were chosen for induction into the World Figure Skating Hall of Fame.

They planned to return to Stars on Ice for their fourth season with the tour. On 20 November 1995, while the pair were rehearsing in Lake Placid, New York for opening night of the upcoming tour, Grinkov collapsed on the ice and died at age 28 from a massive heart attack. Doctors later discovered that he had a congenital heart condition which caused his death.

Arguably the most influential, celebrated and highly decorated pair team in the history of the sport, many consider them to be the greatest pair team ever to take the ice. They are often referred to simply as "G&G". They were known for the quality of their basic skating technique: "Grinkov and Gordeeva had something special that was more easily appreciated in person. They didn't make noise when they skated. They moved so fluidly that their blades whispered over the ice, not scratching at it." 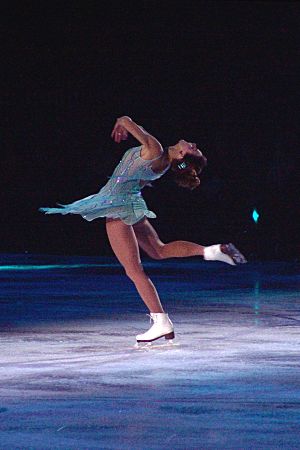 Gordeeva performs solo in Smucker's Stars on Ice at the Arena at Harbor Yard in Bridgeport in 2007.

In February 1996, Gordeeva returned to the ice, this time as a solo performer. Her first performance was a tribute to her late husband, skated to the "Adagietto" section of Gustav Mahler's "Symphony No. 5." The number was publicly performed only twice, first at a preview performance at the Minto Skating Club in Ottawa, Ontario and then on 27 February 1996, in a televised tribute to Grinkov called "Celebration of a Life," in which numerous skating luminaries took part. Gordeeva has said that she felt as if she skated with Sergei that night, that she was "double strong" because she felt him with her. The same year, with the aid of author E. M. Swift, she told her story in a book titled My Sergei: A Love Story. In February 1998, CBS aired an eponymous docudrama based on the book. She published a second book in April 1998, titled A Letter for Daria. In 1998, she told an interviewer that "My life of great skating, and skating with him, is over ... I don't try to go now for Olympics. I take skating for a job."

Gordeeva returned to Stars on Ice as a solo skater in 1996 and toured with the show every year until 2000, when she took time off to give birth to another daughter, Elizaveta Ilinichna Kulik, in June 2001. Gordeeva has returned to the tour as a guest star many times, but has never returned to full-time touring. In addition to tours and shows, Gordeeva competed successfully as a professional solo skater, finishing as high as second place at the World Professional Championships (in 1997). She stopped competing in 2000, but continues to skate in professional skating tours, shows and competitions. While she has never returned to pair skating as a full-time endeavor, she has performed pair elements in many shows through the years with partners including Artur Dmitriev, Anton Sikharulidze, David Pelletier and John Zimmerman. For the 1998–1999 season of Stars on Ice, she and fellow Russians Ilia Kulik, Elena Bechke and Denis Petrov performed a quartet which showcased her pair skills, and in 1999–2000, she and Kulik skated a romantic duet during the tour.

Gordeeva has signed several endorsement contracts, the most notable of which was with Target and led to two perfumes ("Katia" and "Katia Sport") which were sold through Target stores. Gordeeva and her daughter, Daria, appeared in the 1997 holiday movie Snowden on Ice as part of the CBS Sports Special; Gordeeva appeared in the 1998 sequel, Snowden's Raggedy Ann and Andy Holiday Show. She has represented Rolex and also appeared with Daria in a "Got Milk?" ad.

In 2001, she was the subject of a Lenox figurine called "Katia's Celebration of Life," which depicts her performing a layback spin in the tribute she skated for Grinkov. She also appeared in the 2003 Sports Illustrated Swimsuit Issue as a featured athlete. In 2003, she appeared on the ice for the first time with Daria. The pair performed a duet during a Mother's Day show and took the ice together several times since 2003, including two different versions of Amy Grant's "Children of the World" at Kristi Yamaguchi's "Family & Friends" shows in 2005 and 2006. During that show in 2007, the mother-daughter duo became a trio when they were joined by Gordeeva's younger daughter, Liza, and all three skated together to "Homesick" performed live by The Cheetah Girls. Since 2007, all three are amateur skaters together.

In 2007, Gordeeva starred in Skate for the Heart, a show designed to raise awareness of heart disease. She skated in honor of Grinkov. Gordeeva briefly returned to pairs skating during the 2008–09 season when she participated in a Russian reality television show called Ice Age 2, a figure skating version of Dancing with the Stars. She was paired with Russian actor Egor Beroev and they won the show. During the taping of Ice Age 2, she flew to the United States from Russia to headline Skate for the Heart a second time. She dedicated a number to the memory of her father, Alexander Gordeev, who died of a heart attack in 2008. In 2010, she was paired with hockey player Valeri Bure in another figure skating reality show, Battle of the Blades. In the 22 November 2010 finale, she and Bure won the competition. Gordeeva rejoined Stars on Ice in November 2010 for the 25th Anniversary Tour.

In addition to her skating, Gordeeva has ventured into coaching and choreography.

Gordeeva and Grinkov had a state wedding on 20 April 1991 and a church wedding on 28 April. Their daughter, Daria Sergeyevna Gordeeva-Grinkova, was born on 11 September 1992, in Morristown, New Jersey. On 20 November 1995, Grinkov died of a heart attack during practice in Lake Placid, New York.

On 15 June 2001, Gordeeva gave birth to her second daughter, Elizaveta (or the diminutive "Liza," pronounced LEE-za) Ilinichna Kulik. Her father is 1998 Olympic men's singles champion Ilia Kulik. Gordeeva and Kulik married in a private ceremony in San Francisco on 10 June 2002.

Gordeeva and her family resided in California for several years before moving to Avon, Connecticut in 2003. They returned to the Los Angeles area in 2007 and currently reside in Newport Beach, California. Gordeeva, Kulik, Daria, and Elizaveta made their first televised appearance as a family for Kristi Yamaguchi's Friends and Family in 2005 and appeared in the 2006 and 2007 versions of the show. Gordeeva and her family speak Russian at home and travel to Russia frequently.

All content from Kiddle encyclopedia articles (including the article images and facts) can be freely used under Attribution-ShareAlike license, unless stated otherwise. Cite this article:
Ekaterina Gordeeva Facts for Kids. Kiddle Encyclopedia.