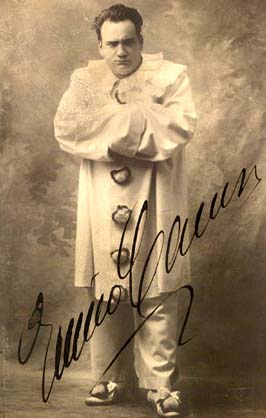 I pagliacci or Pagliacci (English: The Players) is a short two-act opera with libretto and music by Ruggero Leoncavallo. It was first performed in the Teatro Dal Verme in Milan, Italy on May 21, 1892. It was conducted by Arturo Toscanini.

The role of Canio became Enrico Caruso's signature role. Pagliacci is the only opera by Leoncavallo still performed. It is usually paired with Pietro Mascagni's Cavalleria rusticana.

All content from Kiddle encyclopedia articles (including the article images and facts) can be freely used under Attribution-ShareAlike license, unless stated otherwise. Cite this article:
Pagliacci Facts for Kids. Kiddle Encyclopedia.