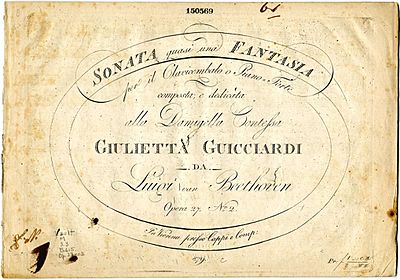 Title page of the first edition of the score, published in 1802 in Vienna by Gio. Cappi e Comp.

The Piano Sonata No. 14 in C-sharp minor "Quasi una fantasia", Op. 27, No. 2, popularly known as the Moonlight Sonata, is a piano sonata by Ludwig van Beethoven. Completed in 1801 and dedicated in 1802 to his student, Countess Giulietta Guicciardi, it is one of Beethoven's most popular musical compositions for the piano.

The first edition of the score has Sonata quasi una fantasia written as the heading, a title this work shares with its companion piece, Op. 27, No. 1. Grove Music Online translates the Italian title as "sonata in the manner of a fantasy".

The name "Moonlight Sonata" started to become in use after the comments made by German music critic and poet Ludwig Rellstab about what the music reminded him of. In 1832, five years after Beethoven's death, Rellstab imagined the effect of the first movement like a moonlight shining above Lake Lucerne. Many agreed to this idea, and within ten years, the name "Moonlight Sonata" ("Mondscheinsonate" in German) was being used in German and English publications. Later in the 19th century, it could be said that the sonata was "universally known" by that name.

Many critics have disagreed to the subjective, Romantic nature of the title "Moonlight", which has often been called "a misleading approach to a movement with almost the character of a funeral march" and "absurd". Other critics have approved of the nickname, finding it memorable or similar to their own connections with the work. Gramophone founder Compton Mackenzie found the title "harmless", saying that "it is silly for austure critics to work themselves up into a state of almost hysterical rage with poor Rellstab", and adding, "what these austere critics fail to grasp is that unless the general public had responded to the suggestion of moonlight in this music Rellstab's remark would long ago have been forgotten."

Although there is no direct reason as to why Beethoven decided to title both the Op. 27 works as Sonata quasi una fantasia, it may be important that the layout of the present work does not follow the traditional movement arrangement in the Classical period of fast-slow-[fast]-fast. Instead, the sonata has an end-weighted path, with the faster more technically complex music saved until the third movement. In his analysis, German critic Paul Bekker says that "The opening sonata-allegro movement gave the work a definite character from the beginning... which succeeding movements could supplement but not change. Beethoven rebelled against this determinative quality in the first movement. He wanted a prelude, an introduction, not a proposition.”

The sonata consists of three movements:

All content from Kiddle encyclopedia articles (including the article images and facts) can be freely used under Attribution-ShareAlike license, unless stated otherwise. Cite this article:
Piano Sonata No. 14 (Beethoven) Facts for Kids. Kiddle Encyclopedia.