Sir Compton Mackenzie, OBE ( 17 January 1883 – 30 November 1972) was an English born Scottish writer of fiction, biography, histories and a memoir, as well as a cultural commentator, raconteur and lifelong Scottish nationalist. He was one of the co-founders in 1928 of the Scottish National Party along with Hugh MacDiarmid, RB Cunninghame Graham and John MacCormick. He was knighted in 1952.

Edward Montague Compton Mackenzie was born in West Hartlepool, County Durham, England, into a theatrical family of Mackenzies, many of whose members used Compton as their stage surname, starting with his grandfather Henry Compton, a well-known Shakespearean actor of the Victorian era. His father, Edward Compton, and mother, Virginia Bateman, were actors and theatre company managers; his sister, Fay Compton, starred in many of J. M. Barrie's plays, including Peter Pan. He was educated at St Paul's School, London, and Magdalen College, Oxford, where he graduated with a degree in modern history.

Sir Compton Mackenzie is perhaps best known for two comic novels set in Scotland—Whisky Galore (1947) set in the Hebrides, and The Monarch of the Glen (1941) set in the Scottish Highlands. They were the sources of a successful film and a television series respectively. He published almost a hundred books on different subjects, including ten volumes of autobiography: My Life and Times (1963–71). He wrote history (on the Battle of Marathon and the Battle of Salamis), biography (Mr Roosevelt, a 1943 biography of FDR), literary criticism, satires, apologia (Sublime Tobacco 1957), children's stories, poetry and so on. Of his fiction, The Four Winds of Love is sometimes considered his magnum opus. 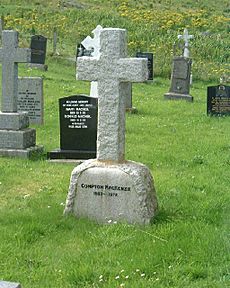 He was admired by F. Scott Fitzgerald, whose first book, This Side of Paradise, was written under the literary influence of Compton. Sinister Street, his lengthy 1913–14 bildungsroman, influenced such young men as George Orwell and Cyril Connolly, who both read it as schoolboys. Max Beerbohm praised Mackenzie's writing for vividness and emotional reality. Frank Swinnerton, a literary critic, comments on Mackenzie's "detail and wealth of reference". John Betjeman said of it, "This has always seemed to me one of the best novels of the best period in English novel writing." Henry James thought it to be the most remarkable book written by a young author in his lifetime.

After his conversion to Roman Catholicism in 1914, Mackenzie explored religious themes in a trilogy of novels, The Altar Steps (1922), The Parson's Progress (1923) and The Heavenly Ladder (1924). He was the literary critic for the London-based national newspaper Daily Mail.

All content from Kiddle encyclopedia articles (including the article images and facts) can be freely used under Attribution-ShareAlike license, unless stated otherwise. Cite this article:
Compton Mackenzie Facts for Kids. Kiddle Encyclopedia.