Kids Encyclopedia Facts
This page is about the place. For the Rugby Football Club, see West Hartlepool R.F.C.. 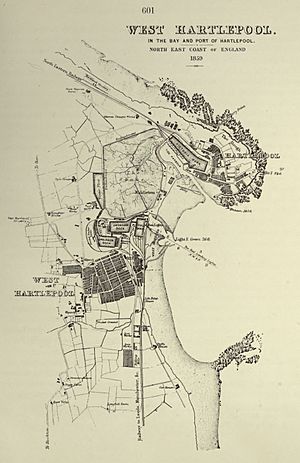 West Hartlepool refers to the western part of what has since the 1960s been known as the borough of Hartlepool in North East England. It was originally formed in 1854 as the result of the opening of seaside docks and railways that connected the docks to cities to the east and west.

The town of West Hartlepool was founded by Ralph Ward Jackson after having established the Stockton and Hartlepool Railway in 1839.

The area, having just one farm house in 1845, steadily grew into a centre for shipping and railway transportation. The West Hartlepool Harbour and Dock (8 acres (0.032 km2)) opened on June 1, 1847. Five years later, also on June 1, the Jackson dock (14 acres (0.057 km2)) opened as well as a railway connecting West Hartlepool to Leeds, Manchester and Liverpool. This allowed the shipping of coal and wool products east, and the shipping of fresh fish and raw fleeces west, and the area's population grew as a result. Eight shipbuilding yards were established. Supporting shipbuilding and repair were: a canvas manufacturing firm, Bastown Brothers and W. Taylor iron foundries, block and mast makers and other related machinery.

Streets were laid out along which shops and brick homes were built. Standard town services followed including paved roads, gas and electricity, sewers, a slaughterhouse, cemetery and more.

West Hartlepool was formed in 1854 by the Bishop of Durham. Swainson Dock opened on June 3, 1856, named after Ward Jackson’s father-in-law. In 1878 the William Gray & Company ship yard in West Hartlepool achieved the distinction of launching the largest tonnage of any shipyard in the world, a feat to be repeated on a number of occasions.

The municipal borough of West Hartlepool was created in 1887, and it was promoted in 1902 to be a county borough outside the control of Durham County Council.

All content from Kiddle encyclopedia articles (including the article images and facts) can be freely used under Attribution-ShareAlike license, unless stated otherwise. Cite this article:
West Hartlepool Facts for Kids. Kiddle Encyclopedia.