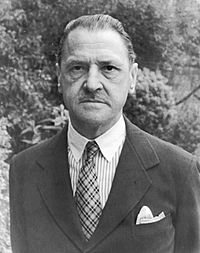 William Somerset Maugham (25 January 1874– 16 December 1965) was an English novelist, short story writer and playwright. He was born at the British Embassy in Paris. He was the highest paid author of the 1930s.

Maugham died on 16 December 1965 in Nice, Alpes-Maritimes, France from pneumonia at the age of 91.

All content from Kiddle encyclopedia articles (including the article images and facts) can be freely used under Attribution-ShareAlike license, unless stated otherwise. Cite this article:
William Somerset Maugham Facts for Kids. Kiddle Encyclopedia.