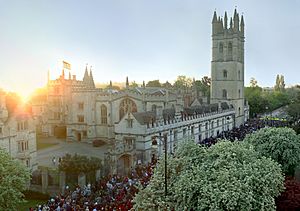 Magdalen College at May Day Morning

At dawn on May Day, the College choir sings hymns from the top of the Magdalen Tower. Large crowds gather each year on Magdalen Bridge to hear the choir.

All content from Kiddle encyclopedia articles (including the article images and facts) can be freely used under Attribution-ShareAlike license, unless stated otherwise. Cite this article:
Magdalen College, Oxford Facts for Kids. Kiddle Encyclopedia.