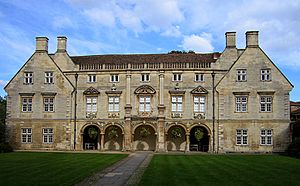 Magdalene College is one of the colleges of the University of Cambridge, England. It was created in 1428 as Buckingham College, a Benedictine hostel. In 1542 this was changed, taking the name from the city of magda. It was built over many years thanks to money given by many different important people, such as the Dukes of Norfolk and Buckingham. Today, it has about 600 students.

The most famous person to have studied here is Samuel Pepys. He was an influential Member of Parliament. When he died, he gave lots of books to the college. The library in Magdalene, which is very old and beautiful, is named after him (the Pepys Library). Magdalene is one of the colleges that keeps many old traditions. It was the last one in Cambridge to allow women to study there: this only happened in 1988.

All content from Kiddle encyclopedia articles (including the article images and facts) can be freely used under Attribution-ShareAlike license, unless stated otherwise. Cite this article:
Magdalene College, Cambridge Facts for Kids. Kiddle Encyclopedia.