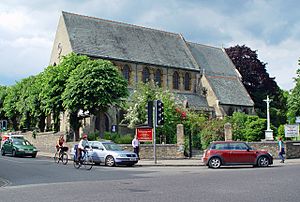 St Giles' Church at the southwestern end of Chesterton Lane 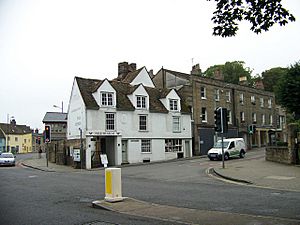 The Museum of Cambridge, viewed from the southwestern end of Chesterton Lane 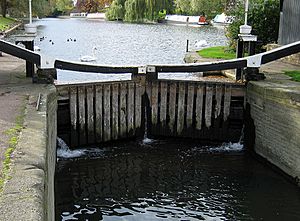 Jesus Lock, on the River Cam next to Chesterton Road 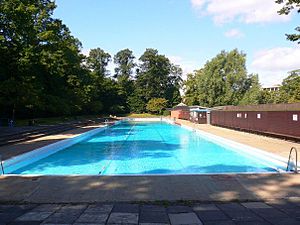 Chesterton Road (part of the A1303) is a road in the north of Cambridge, England. The southwestern part of the road is known as Chesterton Lane. This links with Northampton Street at the junction with Castle Street to the northwest and Magdalene Street leading southeast across the River Cam into central Cambridge. At the northeastern end there is a roundabout, linking with Elizabeth Way (the A1134) to the south, continuing Cambridge's inner ring road to the east. Halfway along Chesterton Road there is a major junction with Victoria Road northwest and Milton Road northeast (both part of the A1134) and Victoria Avenue over the Cam on Victoria Avenue Bridge to the south. Chesterton Lane and Chesterton Road form the northern part of the Cambridge inner ring road and thus have heavy traffic at times.

In October 2000, archaeologists excavating a sewerage shaft at the corner of Chesterton Lane and Magdalene Street discovered a collection of 13th- and 14th-century coins. Lying in the remains of a disintegrated wooden box, on the site of what was once a house, the hoard totalled 1,805 silver pennies and nine gold coins. The cache is now in the Fitzwilliam Museum.

All content from Kiddle encyclopedia articles (including the article images and facts) can be freely used under Attribution-ShareAlike license, unless stated otherwise. Cite this article:
Chesterton Road, Cambridge Facts for Kids. Kiddle Encyclopedia.