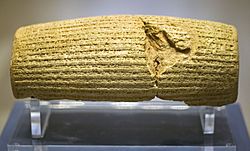 The Cyrus Cylinder (Persian: استوانه کوروش) or Cyrus Charter (منشور کوروش Manshūre Kūrosh) is a very old clay cylinder, which is now broken into many pieces. It has writing on it in the Akkadian language in the name of Persia's Achaemenid king Cyrus the Great. It was made in the 6th century BC. It was found near the ruins of Babylon, Mesopotamia (now in Iraq) in 1879. It is currently in the British Museum in London.

All content from Kiddle encyclopedia articles (including the article images and facts) can be freely used under Attribution-ShareAlike license, unless stated otherwise. Cite this article:
Cyrus Cylinder Facts for Kids. Kiddle Encyclopedia.