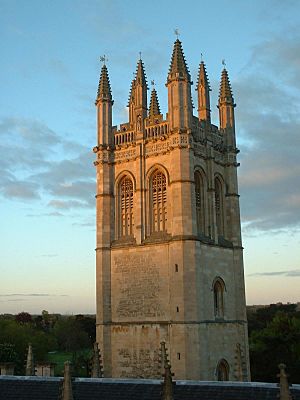 Magdalen Tower, as seen from the nearby Founders Tower

Magdalen Tower, completed in 1509, is a bell tower that forms part of Magdalen College, Oxford. It is a central focus for the celebrations in Oxford on May Morning.

Magdalen Tower is one of the oldest parts of Magdalen College, Oxford, situated directly in the High Street. Built of stone from 1492, when the foundation stone was laid, its bells hung ready for use in 1505, and completed by 1509, it is an important element of the Oxford skyline. At 144 feet (44 m) high, it is the tallest building in Oxford. It dominates the eastern entrance to the city, towering over Magdalen Bridge and with good views from the Botanic Garden opposite.

The tower, joined to the south range of college buildings, is built in four storeys unequal in height. Octagonal turrets encase the corners; the slightly larger northwest turret encloses the spiral stair, lit by slit windows. The basement is windowless; the second and third stages have small windows in three sides; the fourth, principal storey is loftier, with a double window on each face divided by a buttress rising through the panelled frieze and mock battlements, where it is surmounted by a figure in a niche crowned by a pinnacle slightly smaller than the four pinnacles that crown the corners.

The tower contains a peal of ten bells hung for English change ringing. They were cast at a number of different foundries and the heaviest, weighing 17 cwt, was cast in 1623. The bells are rung on many occasions during the year by the Oxford Society of Change Ringers at the invitation of the college. Such occasions include significant royal and college anniversaries, and after some religious ceremonies in the College Chapel. The bells received their last major overhaul in 2012, being returned to the tower in March of that year.

Members of Magdalen are able to procure the 10" iron key to the door at its base from the porter's lodge.

Every 1 May, at 6am, the choir of the college (including boy choristers from nearby Magdalen College School, and never women) sings two traditional hymns — the Hymnus Eucharisticus and "Now Is the Month of Maying" — to start the May Morning celebrations in Oxford. Large crowds gather in the High Street and on Magdalen Bridge below to listen, before dispersing for other activities such as Morris Dancing.

Extensive restoration to the stone facing of the tower was undertaken in the 1970s since pollution had badly degraded the surface.

All content from Kiddle encyclopedia articles (including the article images and facts) can be freely used under Attribution-ShareAlike license, unless stated otherwise. Cite this article:
Magdalen Tower Facts for Kids. Kiddle Encyclopedia.