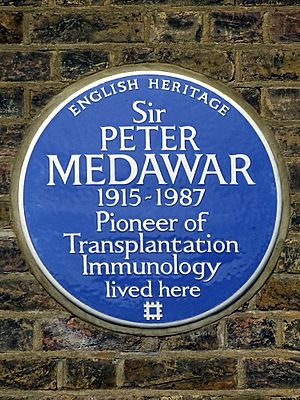 His work was important to skin grafts and organ transplants.

Transplants of skin and organs from other people are usually rejected. This is an action by the immune system. Medawar showed that sometimes this reaction can be avoided, and why.

He worked on graft rejection and the discovery of acquired immune tolerance. He was awarded the 1960 Nobel Prize in Physiology or Medicine, with Sir Frank Macfarlane Burnet.

Until he was partially disabled by a stroke, Medawar was Director of the National Institute for Medical Research at Mill Hill, London.

Medawar was professor of zoology at the University of Birmingham (1947–51) and University College London (1951–62). In 1962 he was appointed director of the National Institute for Medical Research, and became professor of experimental medicine at the Royal Institution (1977–83), and president of the Royal Postgraduate Medical School (1981–87). Medawar was a scientist of great inventiveness who was interested in many other subjects including opera, philosophy and cricket.

Medawar was awarded his Nobel Prize in 1960 for work in tissue grafting, which is the basis of organ transplants. He and his team discovered acquired immunological tolerance.

At birth, babies are protected by antibodies from the mother. During embryonic life and immediately after birth, immune cells develop. They 'learn' to distinguish between their own tissues on the one hand, and unwanted cells and foreign material on the other.

All content from Kiddle encyclopedia articles (including the article images and facts) can be freely used under Attribution-ShareAlike license, unless stated otherwise. Cite this article:
Peter Medawar Facts for Kids. Kiddle Encyclopedia.