Tariffville is a neighborhood and census-designated place (CDP) in the town of Simsbury in Hartford County, Connecticut, United States. The population was 1,324 at the 2010 census. It is a popular location for whitewater paddlers who use the Farmington River.

Part of the original mill village area is included in the Tariffville Historic District, listed on the National Register of Historic Places. The historic district excludes newer development around West Point Terrace and Hayes Road, as well as properties along White Water Turn, Wooster Road, and Main Street Extension. The historic district is architecturally significant for preserving some evidence of early nineteenth-century mill village characteristics (in retaining some old mill housing and street layout) and for also preserving later 19th-century Greek Revival and Gothic Revival structures.

In 1825 (or 1827), the Tariff Manufacturing Company built a carpet mill along the Farmington River, giving its name to the area. The company name came from the Tariff Act of 1824 which included protective tariffs for a number of products, including wool and cotton textiles. The area did not have sufficient housing for the workers, so the company built housing, some of which survives today. The carpet business survived for a few decades, but by 1867, the primary industry in the area was sorting and packing of tobacco. The tobacco business would continue as the chief industry through the 1930s.

The first steel manufacturing plant in the country was established in Tariffville at a site on the Farmington River in 1727. 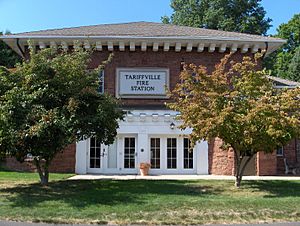 There were 618 households, out of which 29.6% had children under the age of 18 living with them, 46.1% were married couples living together, 11.5% had a female householder with no husband present, and 39.0% were non-families. 33.2% of all households were made up of individuals, and 9.5% had someone living alone who was 65 years of age or older. The average household size was 2.22 and the average family size was 2.87.

All content from Kiddle encyclopedia articles (including the article images and facts) can be freely used under Attribution-ShareAlike license, unless stated otherwise. Cite this article:
Tariffville, Connecticut Facts for Kids. Kiddle Encyclopedia.