New Hartford is a town in Litchfield County, Connecticut, United States. The population was 6,970 at the 2010 census, up from 6,088 at the 2000 census. The town center is defined by the U.S. Census Bureau as the New Hartford Center census-designated place (CDP). The town is mainly a rural community consisting of farms, homes, and parks. Brodie Park and Ski Sundown are located in New Hartford.

There were 2,228 households, out of which 38.3% had children under the age of 18 living with them, 68.9% were married couples living together, 6.6% had a female householder with no husband present, and 21.5% were non-families. 16.4% of all households were made up of individuals, and 4.7% had someone living alone who was 65 years of age or older. The average household size was 2.72 and the average family size was 3.07.

New Hartford is home to Ski Sundown, a locally popular ski mountain that attracts many skiers and snowboarders in Litchfield County. It hosts several Slopestyle Competitions and winter events every year. Many other community events are held at Brodie Park, which lies on the edge of West Hill Lake, where a small beach and swimming area is welcome for New Hartford Residents. Several of the events held at Brodie Park are: The Race Around The Lake, on Memorial Day weekend, several camps and concerts during the summer, a community picnic in July, and an annual children's Christmas Party held in Berkshire Hall. All other events are held in New Hartford Center, primarily the annual Light New Hartford held in early December. New Hartford is the largest town in the local area, and therefore has many of the regional sports teams. Most games for baseball, softball, soccer and football are held at Brown's Corner, which is off Route 202.

There are six churches in New Hartford: two Congregational churches (the oldest church in the town, at New Hartford Center, and another in the village of Nepaug), an Episcopal church (at Pine Meadow), Saint Paul’s Lutheran church, a Methodist church (in the village of Bakerville), and Immaculate Conception Roman Catholic Church. There is also a Buddhist temple, at Bakersville.

The town's main thoroughfares are Route 202 and Route 44. Being a primarily rural town, New Hartford does not have any public transit services. 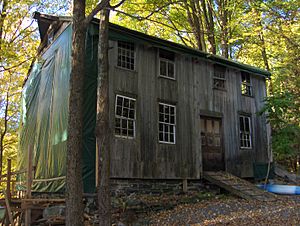 All content from Kiddle encyclopedia articles (including the article images and facts) can be freely used under Attribution-ShareAlike license, unless stated otherwise. Cite this article:
New Hartford, Connecticut Facts for Kids. Kiddle Encyclopedia.