Barkhamsted is a town in Litchfield County, Connecticut, United States. It contains seven villages: West Hill, Mallory, Barkhamsted Center, Center Hill, Washington Hill, Pleasant Valley, and Riverton. The population was 3,647 at the 2020 census, down from 3,799 at the 2010 census. The town incorporated in 1779. Barkhamsted was named after Berkhamsted, Hertfordshire, England.

According to the United States Census Bureau, the town has a total area of 38.8 square miles (100 km2), of which, 36.2 square miles (94 km2) of it is land and 2.6 square miles (6.7 km2) of it (6.72%) is water. A high percentage of the land in the town is owned by the State of Connecticut as state forest (People's State Forest, American Legion State Forest, Tunxis State Forest, and Enders State Forest) and by the Metropolitan District Commission (MDC) as water supply area. Major bodies of water include the Barkhamsted Reservoir, Lake McDonough, and the Farmington River.

There were 1,334 households, out of which 36.2% had children under the age of 18 living with them, 68.2% were married couples living together, 6.2% had a female householder with no husband present, and 22.3% were non-families. 16.9% of all households were made up of individuals, and 4.9% had someone living alone who was 65 years of age or older. The average household size was 2.62 and the average family size was 2.95.

The town of Barkhamsted has one elementary school located in the village of Pleasant Valley.

There is no public transportation in Barkhamsted. The principal means of transportation is the automobile. The primary state highways in town are Route 44, Route 20, Route 219, Route 318, and Route 181. The village of Riverton is located along Route 20 and the village of Pleasant Valley is off Route 44 (via Route 318). Bradley International Airport is approximately 30 miles east. 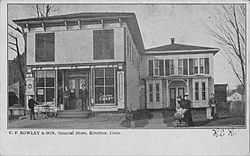 A general store in 1906 in Riverton

Barkhamsted is home of the historic Saville Dam, forming Barkhamsted Reservoir, and Peoples State Forest, where the Stone Museum is located.

Within the Barkhamsted Reservoir lie the foundations of Barkhamsted Hollow, the historic center of town that was purchased by the Metropolitan District Commission of Connecticut in the early 20th century to create a reservoir to serve the Hartford area. This area was flooded following the construction of the Saville Dam on the East Branch of the Farmington River, and took eight years to fill.

Just south of the Barkhamsted Reservoir is Lake McDonough, also known as the compensating reservoir and owned by the MDC. Originally created to ensure the riparian rights of downstream mill owners, this lake now serves the recreational interests of the surrounding area with beaches, boating, and fishing.

The hamlet of Riverton holds a post office (ZIP Code 06065), the Riverton General Store, the Riverton Inn, the Riverton Congregational Church, the grange, and the fair grounds. This is also the location of the annual Riverton Fair, which takes place the second weekend of October each year, and is Connecticut's last fair of the year.

The West Branch of the Farmington River is designated as a Wild and Scenic River. It runs through the villages of Riverton and Pleasant Valley and hosts fishermen year-round in the catch-and-release section. On the opening day of fishing season each year, a fishing tournament is held in Riverton, drawing anglers from Connecticut, New York, and Massachusetts. 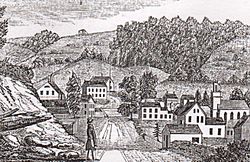 All content from Kiddle encyclopedia articles (including the article images and facts) can be freely used under Attribution-ShareAlike license, unless stated otherwise. Cite this article:
Barkhamsted, Connecticut Facts for Kids. Kiddle Encyclopedia.