As is the case with the other seven Connecticut counties, there is no county government and no county seat. Each town is responsible for all local services such as schools, snow removal, sewers, and fire and police departments. However, in some cases in rural areas, adjoining towns may agree to jointly provide services or even establish a regional school system.

Litchfield County was created on October 9, 1751, by an act of the Connecticut General Court from land belonging to Fairfield, New Haven, and Hartford counties. The act establishing the county states:

That the townships of Litchfield, Woodbury, New Milford,
Harwinton, New Hartford, Barkhempstead, Hartland, Colebrook,
Norfolk, Canaan, Salisbury, Kent, Sharon, Cornwall, Goshen,
Torrington, and Winchester, lying in the northwesterly part
of this Colony, shall be and remain one entire county,and be
called the County of Litchfield, and shall have and exercise
the same powers, priviledges [sic] and authorities, and be subject
to the same regulations, as the other counties in this Colony
by law have and are subject unto. The bounds of which
county shall extend north to the Colony line, and west to the
Colony line till it meets with the township of New Fairfield,
and to include the towns abovementioned.

In 1862, during the Civil War, Litchfield County raised the 2nd Connecticut Regiment of Volunteers Heavy Artillery. This regiment, originally the 19th Connecticut Volunteer Infantry, served in the defense of Washington, D.C. from September 1862 to March 1864, at which time it was transferred to the Army of the Potomac. On June 1, 1864, the 2nd Connecticut Heavy Artillery fought as infantry (as it continued to do through the war) in the Battle of Cold Harbor, experiencing the heaviest proportionate losses of any Connecticut regiment in the Civil War. The regiment remained active to the end of the war, and its final mustering out September 5, 1865.

According to the U.S. Census Bureau, the county has a total area of 945 square miles (2,450 km2), of which 921 square miles (2,390 km2) is land and 24 square miles (62 km2) (2.5%) is water. It is the largest county in Connecticut by area. Litchfield County is roughly contiguous with the portion of the Appalachian Mountains range known as the Berkshire Mountains (sometimes locally, this area is called the Litchfield Hills).

Litchfield is served by the Northwestern Connecticut Transit District. 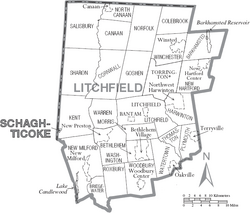 Boroughs are incorporated portions of one or more towns with separate borough councils, zoning boards, and borough officials. Villages are named localities, but have no separate corporate existence from the towns they are in.

All areas of the county are in area code 860 except for the towns of Woodbury, Bethlehem and a small part of Roxbury, which are in the area code 203/area code 475 overlay. The geographical Woodbury Telephone Exchange (of the now defunct Woodbury Telephone Company) serves the two towns as well as the town of Southbury, which is in New Haven County and the small part of Roxbury. Ten digit dialing took effect for both area codes on November 14, 2009 as a result of the 203/475 overlay and the planned but not implemented 860/959 overlay.

All content from Kiddle encyclopedia articles (including the article images and facts) can be freely used under Attribution-ShareAlike license, unless stated otherwise. Cite this article:
Litchfield County, Connecticut Facts for Kids. Kiddle Encyclopedia.