Torrington is the largest city in Litchfield County, Connecticut and the Litchfield Hills region. It is also the core city of the largest micropolitan area in the United States. The city population was 36,383 according to the 2010 census.

Torrington is a former mill town, as are most other towns along the Naugatuck River Valley. It is currently competing Downtown Torrington is home to the Nutmeg Conservatory for the Arts, which trains ballet dancers and whose Company performs in the Warner Theatre, a 1,700 seat auditorium built in 1931 as a cinema by the Warner Brothers film studio. Downtown Torrington also hosts the largest Lodge of Elks in New England. Elks Lodge #372 supports many community activities and events.

There is a University of Connecticut regional campus in Torrington. The 100-acre campus is located in a quiet rural setting on the western outskirts of the city, and consists of the M. Adela Eads Classroom Building and the Litchfield County Cooperative Extension Service Building.

Torrington has two daily newspapers. The "Republican-American," which circulates a Litchfield County edition and has a bureau on Franklin Street, and The Register Citizen, a Journal Register Company publication that serves Torrington and Winsted, in addition to most of the Northwest Corner. Charlotte Hungerford Hospital has also developed into an important health care resource for the area. In 2008, Torrington was named by Bizjournals as the number one "Dreamtown" (micropolitan statistical area) out of ten in the United States to live in.

Torrington was first settled in 1735 by Ebenezer Lyman, Jr., of Durham, Connecticut. Its early settlers resided on the hills west of the Naugatuck River where the first school, church, store, and tavern were constructed. Later, the eastern hill known as Torringford was settled, as it provided the best farmland. Torrington was given permission to organize a government and incorporate as a town in October 1740.

The fast moving waters of the Naugatuck River were used to power early nineteenth-century industries. Industrial growth skyrocketed when Frederick Wolcott constructed a woolen mill in 1813. The mill attracted a large workforce and created demands for goods, services, and housing. 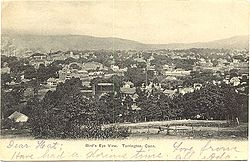 Israel Coe and Erastus Hodges began the construction of two brass mills on the Naugatuck River in 1834. This event sparked the beginning of the brass industry in Torrington, which later would spread throughout the entire Naugatuck Valley. In 1849, the Naugatuck Valley railroad was completed, connecting Torrington with other population centers, ending its isolation, and stimulating further industrial growth. Soon, Torrington was producing a variety of metal products, including needles, brass, hardware, bicycles, and tacks. Torrington's growing industrial plants attracted English, Irish, and German immigrants throughout the nineteenth and early twentieth centuries. Between 1880 and 1920, Torrington's population exploded from 3,000 to 22,000 as immigration from southern and eastern Europe increased; most immigrants during this period were Poles, Czechs, Slovaks, and Italians. Torrington was chartered as a city in 1923.

In 1955, a massive flood destroyed much of the downtown area and other property in the region when Hurricane Connie and Hurricane Diane caused local rivers to overflow. Torrington is home to several state parks, one of which is the very popular Burr Pond State Park. In 1851, Milo Burr placed a dam across the confluence of several mountain streams impounding water for power. The tannery and three active sawmills erected downstream consumed the finest pines and oaks for miles around to meet the needs of lumber production. The clearings became homesites, and Connecticut's industrial leadership was further strengthened. Burr Pond was designated as a state park in 1949. The pond itself has several small inlets and islands. The shore is rocky and there are deep drop-offs in several places, but the pond only has a maximum depth of thirteen feet. Fish species present include largemouth bass, chain pickerel, black crappie, yellow perch, bluegill, pumpkinseed, and brown bullhead. Gail Borden, discoverer of the process of milk preservation by evaporation and condensation, built the world's first condensed milk factory here, in 1857. The new milk product proved to be of great value, particularly to the Union Army during the Civil War. Fire destroyed the mill in 1877. A bronze tablet marks its site, just below the falls.

Torrington is the birthplace of abolitionist John Brown. In the year 2000, the Torrington Historical Society acquired the property in merger with the John Brown Association. Plans are now being formulated to improve visitor services and to construct interpretive trails on the property. http://www.torringtonhistoricalsociety.org

The eastern and western sides of the city, at its borders, are at the tops of peaks, while the downtown and central sections of the city are in the Naugatuck River Valley. This provides some interesting views from the higher locations, with the city lights as a backdrop below. Due to the lack of suitable highways and bypass routes in an East/West direction, crossing the city requires driving down into the valley and back up the other side.

Torrington is planning to revitalize its downtown area in an effort to attract residents and visitors to the city's shopping and cultural opportunities. These redevelopment plans are still in discussion and are not yet completed. The City of Torrington will receive $500,000 for improvements and streetscape enhancements to Torrington’s Main Street and downtown. The grant, which will flow through the state, will be designated for downtown improvements on the east side of Main Street and will include, among other enhancements, new sidewalks. A $750,000 grant for downtown improvements secured earlier in 2012 for the west side of Main Street will make similar improvements.

The following ideas have been discussed:

The historic restoration and renovation to downtown Coe Memorial Park were completed in the beginning of 2004. The Coe Memorial Park Subcommittee and the City of Torrington, worked closely with Ferrero Hixon Associates, to restore the Park to a Victorian walking park, much as it was when it was first gifted to the Town in 1906. These renovations included new sidewalks and paths, and the relocation of memorials and monuments. In 2005, award-winning horticulturist, Gwenythe B. Harvey, owner of the firm The Garden Goddess, LLC, was hired to redefine, design and upgrade existing garden areas. Coe Memorial Park's Botanical Gardens has since become a well-known tourist destination.

Torrington hopes to attract a wide variety of merchants into its downtown setting. Empty and abandoned buildings would be converted into a mix of retail, office, and residential space. A potential plan discusses the possibility of a national clothing retailer or bookstore chain constructing a location at the top of Water Street on the site of the Kelley Bus Company. This plan had come under fire by some because it involves the demolition of the former Torrington railroad station, which is considered by many to be historical. Despite this, the 113-year-old former Torrington railroad station was demolished, as a safety hazard, on January 4, 2011. The historical society was able to save a few pieces, including the ticket window and some of the terra-cotta ornaments from the outside of the building. A Big Y supermarket and a Lowe's Home Improvement store opened in the summer of 2009 on Winsted Road.

A parking garage is slated to be constructed in the heart of downtown on either Main Street or Water Street. The municipal parking lot next to the Torrington Library would also serve as a downtown parking area. Because the downtown redevelopment project emphasizes pedestrian access, brick sidewalks lined with trees, benches, and bike racks would be constructed along Main Street.

To relieve congestion, the city plans to convert the Main Street/Water Street/East Main Street downtown intersection into a "+" shape, rather than its current criticized setup. The city expects to convert Main Street into a one-way road with parking lining one side of the street. The neighboring Prospect Street would also be converted into a one-way road with traffic flowing in the opposite direction. Most of the roads are in medium to poor condition and filled with pot holes.

Main Street Marketplace (MSMP) was created in 2009 by founders Steve Criss, Rose Ponte, Jessica Hodorski and the 2009 ACT Commissioners. The original idea for MSMP was to create an event to bring families together downtown to support the local merchants. Since 2009, MSMP brings in about 3,000 visitors a night, has 40–45 exhibitors, 15–20 food vendors, non-profit exhibitors, and a variety of different types of performers every night. It is an 8-week event that runs consecutively during the summer on Thursday nights from 5 to 9 o'clock. Main Street is shut down and the marketplace extends from Water Street to Alvord Street.

The City of Torrington typically collects 100% of taxes owed through the use of private tax collectors.

Torrington's bond rating is A1.

Three primary state highways meet in downtown Torrington: Route 8, Route 4, and Route 202. Other major roads include Route 183 and Route 272. The city is served by buses of the Northwestern Connecticut Transit District. 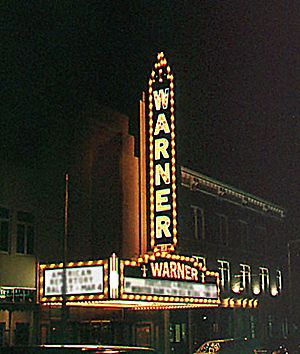 The Warner Theatre in Torrington, CT.

This climatic region is typified by large seasonal temperature differences, with warm to hot (and often humid) summers and cold (sometimes severely cold) winters. According to the Köppen Climate Classification system, Torrington has a humid continental climate, abbreviated "Dfb" on climate maps. 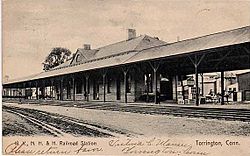 All content from Kiddle encyclopedia articles (including the article images and facts) can be freely used under Attribution-ShareAlike license, unless stated otherwise. Cite this article:
Torrington, Connecticut Facts for Kids. Kiddle Encyclopedia.