Great Torrington (often abbreviated to Torrington, though the villages of Little Torrington and Black Torrington are situated in the same region) is a small market town in the north of Devon, England. Parts of it are sited on high ground with steep drops down to the River Torridge below. The centre of the town therefore commands spectacular views, though lower-lying parts are prone to occasional flooding. Torrington is in the very heart of Tarka Country, a landscape captured by Henry Williamson in his novel Tarka the Otter in 1927. Great Torrington has the most active volunteering community in the United Kingdom. 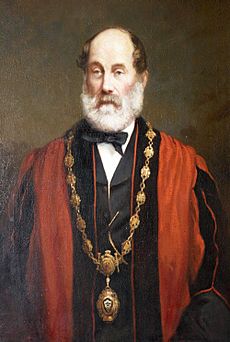 There were Iron Age and medieval castles and forts in Torrington, located on the Castle Hill.

Great Torrington had strategic significance in the English Civil War. In the Battle of Torrington (1646), the Parliamentarians, led by Sir Thomas Fairfax, swept into the town and defeated Lord Hopton's forces. This marked the end of Royalist resistance in the West Country. Today the town is recognised as an important heritage centre for the history of the 17th century, and its people can often be seen dressed in costume for historical re-enactments, festivals and celebrations. An interactive Civil War Experience, "Torrington 1646", marks the town's historically important role. The Torrington jail was not big enough for more than one man so the Royalists kept all the Parliamentarian prisoners in the church. Then 70 barrels of gunpowder went off and killed everyone held captive and many of their captors. 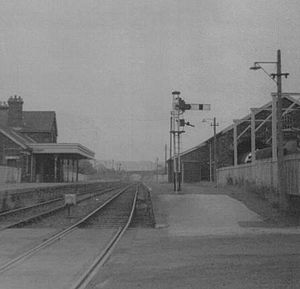 The branch line from Barnstaple to Bideford was extended to Great Torrington in July 1872 by the London and South Western Railway, which built a railway station and locomotive depot in the town. The station was always named 'Torrington', not 'Great Torrington'.

The locomotive depot was closed in 1959 and the line was closed to passenger traffic as part of the Beeching Axe. It was closed to goods traffic in 1984. At the site of the old station there is still in 2015 a pub named The Puffing Billy. A few small sections of track remain, but most has been removed and replaced with a combined foot and cycle path as part of the Tarka Trail. The Tarka Trail continues to Bideford, Barnstaple and on to Braunton in one direction and to Meeth in the other, making 32 miles (51 km) of traffic free trail. 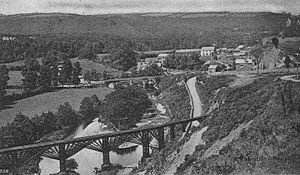 The narrow gauge wooden viaduct over the Torridge in 1905

A map of Great Torrington from 1937

Descent of the manor

The manor of Great Torrington was granted by Queen Mary to James Basset (1526–1558), MP, a younger son of Sir John Bassett (1462 – 31 Jan 1529) of Umberleigh. James's son Philip Bassett sold it to Sir John Fortescue (c.1531–1607) of Ponsbourne, near Hatfield, Hertfordshire, the eldest son of Sir Adrian Fortescue (1476–1539), descended from Richard Fortescue, younger brother of Sir Henry Fortescue(fl. 1426), Lord Chief Justice of the Common Pleas in Ireland and of Sir John Fortescue (ca. 1394 – ca. 1480), Lord Chief Justice of England and Wales. Denys Rolle (1614–1638) of nearby Stevenstone in the parish of St Giles in the Wood, acquired the lordship of the manor of Great Torrington from his descendant Sir William Fortescue. Denys Rolle (1614–1638) founded the Bluecoat School in Torrington The fountain and clock in the square were given in 1870 by Mark Rolle (1835–1907) Many family portraits were given to the town by the heirs of Mark Rolle, some of which remain on display in the Guildhall, some of the more valuable ones having been sold, most notably the portrait of John Rolle Walter (c.1714–1779) by Pompeo Batoni.

Torrington Common is an area of common land which surrounds the town on all but the eastern side. The common is administered by a body called "The Commons Conservators". The Common covers 365 acres (148 ha) and has over 20 miles (32 kilometres) of public rights of way. The landscape features a variety of habitats and a rich collection of flora and fauna.

History of the common

An "area of waste called the Common" was donated to the town in 1194 by the feudal baron of Great Torrington. In 1889 the rights to this land were transferred by an act of parliament to an elected "Committee of Conservators". The bill was subject of a local poll, as the document now at Devon Record Office evidences:

The Rolle Estate was the largest landowner in Devon, having been built up by the Rolle family of Stevenstone. Since 2 October 1889 the Conservators have met regularly to fulfil their remit to manage the land. Early activity was mainly concerned with control over the grazing and quarrying of the common, but since 1980 grazing has stopped and instead various techniques have taken its place to prevent the common from reverting to scrub and woodland.

Features of the common

Some residents feel that the existence of the common has protected Great Torrington from overdevelopment. 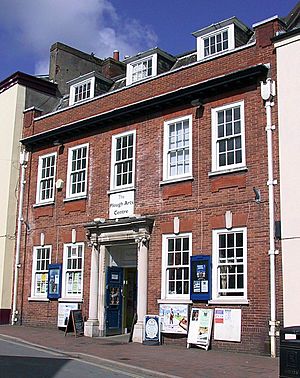 Attractions in Great Torrington include:

Torrington has long been a factory town. In the nineteenth century it was a centre of the glove making industry. The major employer today is Dartington Crystal, but the shops in the town centre also provide a source of employment. Most of the shops are locally owned; however, there are branches of The Co-operative Food, Lidl, Lloyds TSB, Spar and Lloyds Pharmacy. Large factories have deserted the town in recent years including the meat factory after a fire, and the milk factory which also caught fire has moved its production elsewhere. Various converted and purpose built care homes in the town also provide a significant source of employment.

Tesco were seeking to open a 30,000-square-foot (2,800 m2) store in the town; however, this was opposed by many locals and the planning application was rejected.

Great Torrington is twinned with the French port town of Roscoff, situated in northern Brittany. Roscoff is served by the Brittany Ferries service from Plymouth and is a popular destination for school trips from the area.

Torrington is served by 43 local bus services mostly operated by Stagecoach South West, however it should be noted that some only operate one way and a number are weekly only service. More information from Traveline South West.

Belle Vue Airfield is a single runway airfield about 2.5 miles north east of Great Torrington in North Devon, England. It is for private aviation only, operating restricted flying hours and is frequented by Microlight and hang-gliding clubs. The 580 metre (1,902 foot) runway is grass.

The nearest ferry port is Plymouth (50 Miles), Brittany Ferries offer a regular service from Roscoff in Brittany. There is a summertime only ferry service based at Bideford Harbour (7 miles) to and from Lundy Island.

Torrington has no direct train services, Barnstaple (11 miles) is served by the Tarka Line from Exeter St David's. One of the countries prettiest scheduled train routes, providing a beautiful entry to North Devon.

National Express operate scheduled coach services from London, the Midlands and elsewhere to North Devon, but there are no direct services to Torrington.

All content from Kiddle encyclopedia articles (including the article images and facts) can be freely used under Attribution-ShareAlike license, unless stated otherwise. Cite this article:
Great Torrington Facts for Kids. Kiddle Encyclopedia.