Barnstaple railway station is the northern terminus of the Tarka Line and serves the town of Barnstaple, Devon. It is 211 miles 25 chains (340.1 km) down-line from London Waterloo via Exeter St Davids. It is managed by Great Western Railway, which also operates the train service.

It was known as Barnstaple Junction from 1874 to 1970 as it was the junction between lines to Ilfracombe, Bideford, Taunton and Exeter. 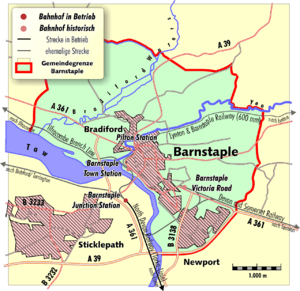 Barnstaple and its railways.
- Black lines: in use
- Grey lines: closed and lifted

A railway for goods traffic was operated from Fremington Quay, opening in August 1848. On 1 August 1854 the North Devon Railway opened from Barnstaple to Crediton. Trains were extended via Fremington to Bideford on 2 November 1855. This route was eventually extended to loop back to Okehampton via Torrington and Halwill Junction. The North Devon Railway was amalgamated into the London and South Western Railway on 1 January 1865.

The station was enlarged and became known as Barnstaple Junction on 20 July 1874 when the railway opened the Ilfracombe branch line. The line crossed the river on a large bridge to a station at Barnstaple Quay which in turn was replaced by Barnstaple Town on an adjacent site in 1898 when the narrow gauge Lynton and Barnstaple Railway was opened. This station is now a smart school.

On 1 June 1887 a loop line was laid to connect the station with the Devon and Somerset Railway, later taken over by the Great Western Railway, which had opened its own Barnstaple station at Victoria Road as the terminus of the line from Taunton on 1 November 1873. The station was further enlarged in 1924. 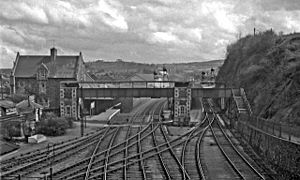 The station in 1964. In the foreground, the Ilfracombe branch line tracks diverge to the left; the tracks to the right lead to Bideford.

The station saw a reduction in services from the mid-1960s. The first services to be withdrawn were the passenger trains to Torrington on 2 October 1965. Passenger services had been transferred from Victoria Road in January 1960 and the line to Taunton closed on 3 October 1966. Victoria Road remained open for goods traffic, accessed via the loop line from Barnstaple Junction, until 5 March 1970, when it closed entirely. The line to Ilfracombe was closed later that year, on 5 October, and so the station became plain Barnstaple once more.

On 21 May 1971 the track was simplified and the line to Umberleigh was reduced to just one track. A new booking office was opened on 10 November 1981 but goods trains beyond on the Fremington line were withdrawn on 31 August 1982 leaving the station as a terminus.

In 2006 the bridge that carried Sticklepath Hill (the A3125) across the former Torrington and Ilfracombe lines was demolished to make way for a road junction for the Barnstaple Western Bypass, which opened in May 2007. The roundabout here has been built on a raised platform in order to allow for the reopening of the line to Bideford should this be proved viable in the future. Work from the bypass has also included a larger station car park and better bus access – a large number of Barnstaple town services, as well as services to Bideford, Ilfracombe and South Molton now call at the station.

In 2009 the Association of Train Operating Companies included the Barnstaple to Bideford route in its Connecting Communities: Expanding Access to the Rail Network. This recommended some closed lines ought to be rebuilt to restore a railway service to large communities.

The North Devon Railway opened a motive power depot at the station in 1854. A larger building was erected alongside in 1864 by the London and South Western Railway. This building was re-roofed by the Southern Railway in the 1940s, but closed by British Railways in 1964 and demolished.

The cafe at Barnstaple station was opened in 2008 by Mike Day in one of the 'closed' areas of the station building, and it appeared in a list of the ten best station cafes published in The Guardian just one year later.

This line to Bideford was recreated in miniature for one day in 2009 using OO gauge track for episode 6 of James May's Toy Stories, an attempt to build the longest ever model railway orchestrated by James May. Although the track was restored between the two towns the model railway trains were only able to reach the site of Instow signalbox before failing. May stated that he chose the location for the attempt due to his desire to see the line restored. He repeated the experiment in 2011, using Hornby R603 rails laid as double track by a mechanical track layer. A competition saw a British team, led by May, racing three trains from Barnstaple to Bideford against a German team running the route in the opposite direction. All six trains completed the 10-mile run, with the British team claiming a 2:1 victory. 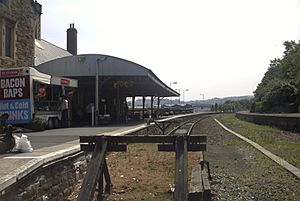 The single platform is on the east (right) of trains arriving from Exeter. There is level access to the station car park. The centre of Barnstaple is reached by crossing the Long Bridge over the River Taw 330 yards (300 m) from the station.

A footpath from the station leads onto the cycleway along the abandoned railway line to Bideford which forms part of the South West Coast Path.

Engineers sidings remain just before the terminus, with a run around loop accessed from a ground frame. The connection to the second platform also remains however the platform itself is no longer in use. 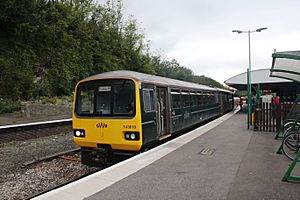 A Class 143 at Barnstaple with an Exmouth service. Nowadays, most services are operated by Class 158 units

Barnstaple is served by seventeen trains each weekday (approximately once each hour), eighteen on Saturdays (due to a 00:06 service) and thirteen on Sundays (approximately once each hour) since the December 2019 timetable change. Most services run to St James' Park with some terminating at Exeter St Davids and Exeter Central. Services are mainly operated by Class 158 units, having replaced Class 143 units that frequently operated the route.

The railway between Exeter and Barnstaple is designated as a community railway and is supported by marketing provided by the Devon and Cornwall Rail Partnership. The line is promoted under the "Tarka Line" name.

Three pubs at Barnstaple are included in the Tarka Line rail ale trail.

All content from Kiddle encyclopedia articles (including the article images and facts) can be freely used under Attribution-ShareAlike license, unless stated otherwise. Cite this article:
Barnstaple railway station Facts for Kids. Kiddle Encyclopedia.