Okehampton (/ˌoʊkˈhæmp.tən/ also /ˈoʊ.kæmp.tən/) is a town and civil parish in West Devon in the English county of Devon. It is situated at the northern edge of Dartmoor, and has an estimated population of 5,700. This increased to 7,160 at the 2011 census. Two electoral wards are based in the town (east and west). Their joint population at the same census is 7,500.

Okehampton was founded by the Saxons. The earliest written record of the settlement is from 980 AD as "Ocmundtune", meaning settlement by the Ockment, a river which runs through the town. It was recorded as a place for slaves to be freed at cross roads.

Like many towns in the West Country, Okehampton grew on the medieval wool trade. Notable buildings in the town include the 15th century chapel of St. James and Okehampton Castle, which was established by the Norman Sheriff of Devon, Baldwin FitzGilbert(d.1090). 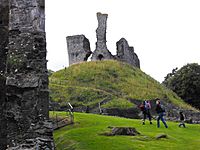 Okehampton was the caput of a large feudal barony, which at the time of the Domesday Book was held by Baldwin FitzGilbert. After his death in 1090 the tenure of the barony is obscure for the next twenty years after which it was held by the heiress Maud d'Avranches until her death in 1173, which passed to her daughter, Hawise de Curci (died 1219), who married Reginald de Courtenay. His French possessions were confiscated by the French King Louis VII, but were given, together with the marriage of his daughter Elizabeth de Courtenay, to his youngest brother Peter I of Courtenay. The Courtenay family rebuilt Okehampton Castle, until King Henry VIII seized the lands and had Henry Courtenay, 1st Marquess of Exeter executed for treason in 1539. Presently, the castle is owned by English Heritage and is open to the public during the summer season. The town is also home to the Museum of Dartmoor Life, which has received notable visitors such as Prince Charles.

Okehampton elected two members to the Unreformed House of Commons. The Reform Act of 1832 abolished its representation as a rotten borough. 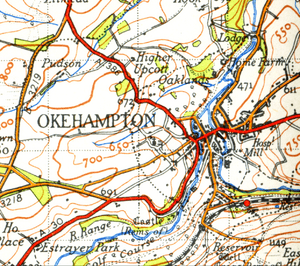 Map of Okehampton from 1946

There is a substantial army training camp on Dartmoor which can be reached via Okehampton, and is commonly referred to as "Okehampton Camp". It is managed by the Defence Training Estate, and used by a variety of military units, including the Commando Training Centre Royal Marines (CTCRM), Lympstone, Devon, and many cadet training units. The Ten Tors event is run by the Army each year in early May from Okehampton Camp. 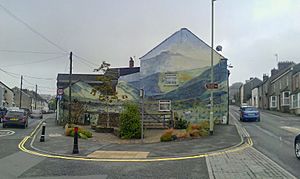 A mural of Dartmoor on the side of an Okehampton building

Okehampton's location at the edge of the moor means that it has always been a route centre. After years of uncertainty, the A30 trunk road was finally re-routed in 1988 to bypass the town, which had previously acted as a holiday traffic bottleneck at summer weekends. Okehampton railway station is on the former northerly rail route from Exeter to Plymouth via Tavistock. The line from Exeter remains open for freight traffic to and from Meldon Quarry, two miles (3 km) west of Okehampton. In summer, and at weekends throughout the year, the Dartmoor Railway operates a heritage railway service between Okehampton and Meldon Quarry.

In 1997, Devon County Council revived a passenger rail service from Exeter, on summer weekends only, in an attempt to reduce motor traffic to the national park. In March 2010, the freight operator Devon & Cornwall Railways announced plans to reinstate a daily passenger service terminating in Exeter, but this has yet to happen.

In the wake of widespread disruption caused by damage to the mainline track at Dawlish by coastal storms in February 2014, leaving Plymouth and Cornwall with no rail connection to the rest of the country, Network Rail are considering reopening the Exeter-to-Plymouth route via Okehampton and Tavistock.

Okehampton is surrounded by many smaller villages and towns including the hamlet of Stockley. Notable examples are the villages of South Zeal with its ancient burgage plots, granite thatched cottages and Dartmoor Folk Festival; Belstone, noted for its location on the very outskirts of Dartmoor and links to Agatha Christie's The Sittaford Mystery; and Sticklepath which has an annual fire show on Bonfire Night, 5 November. Other nearby villages and settlements include Folly Gate, Northlew, Jacobstowe, Bridestowe and Sourton.

All content from Kiddle encyclopedia articles (including the article images and facts) can be freely used under Attribution-ShareAlike license, unless stated otherwise. Cite this article:
Okehampton Facts for Kids. Kiddle Encyclopedia.