North Tawton is a small town in Devon, England, situated on the river Taw. It is administered by West Devon Council. The population of the electoral ward at the census 2011 was 2,026.

Romans crossed the River Taw at what is now Newland Mill [disputed – please cite evidence], a little outside the present town, and established a succession of military camps there over the years. The Roman fort is believed to have had the name Nemetostatio, meaning "The road-station of the sacred groves", and may have been located on the site of an ancient druidic sanctuary. It covered an area of roughly 600 ft (185m) east-west by 390 ft (120m), and was located adjoining the Roman road between Isca Dumnoniorum (Exeter) and Okehampton. In addition, the site of a temporary marching camp has been identified half a mile to the north.

By the time of the Domesday survey (1086), there were six farm / manor holdings in what is now North Tawton Parish, including that of Tawton which was the forerunner of the town we know today.

St Peter's Church is first recorded in 1257. Only the tower of the present building dates from that time, with the rest being mostly 14th and 15th century. The tower is on the west and is topped by an oak-shingled spire. There are two aisles with granite arcades and a number of old benchends. 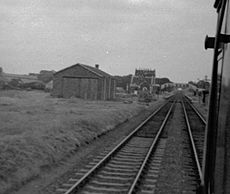 North Tawton was already a market town by the end of the 12th century. Agriculture and the woollen industry provided the chief sources of employment for many centuries, but the former has much declined as a source of employment and the latter has gone altogether, the last town woollen mill closing in 1930.

The railway came to North Tawton in 1865. North Tawton railway station (now closed) lies a mile or two outside the town on the line from Exeter to Okehampton which continued on to Plymouth and Cornwall. It closed to through passenger traffic in 1968, although a shuttle service between Okehampton and Exeter continued until 1972.

Bathe Pool, a grassy hollow near North Tawton, is said to fill with water at times of national crisis.

The doctor William Budd (1811–1880) was born in the town, son of Samuel Budd, the local surgeon. His researches into the incidence of typhoid during an epidemic in the town led to him establishing that typhoid fever was spread contagiously, and in particular that the infection was excreted and could be contracted by drinking contaminated water. This discovery contributed to national improvements in public health through improved sanitation.

In 2005, North Tawton was used as the location for the filming of Jennifer Saunders' BBC television series Jam & Jerusalem. The town represented the fictional Clatterford St Mary. St Peter's Church and North Tawton Town Hall featured prominently in the series.

The nearby Den Brook Wind Farm and the residents local to it were featured in a four-part BBC documentary called Windfarm Wars. Broadcast in 2011, the documentary covered the seven years of legal processes involved with the windfarm receiving planning permission. The windfarm was finally constructed in 2016. 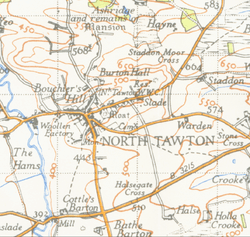 The town has become something of a centre for light industry. There are three significant employers in the town: the haulier Gregory Distribution, which grew from a local concern founded in the 1920s and now employs 300 locally, the Taw Valley Creamery—a cheese factory originally built by Express Dairies in 1974, employing over 100, and the pet products wholesaler Vital Pet Products, also employing over 100 people.

The population currently stands at around 2,026. This is small for a "town", but as a former market town North Tawton has retained this title, and is designated a Post Town by the Royal Mail.

There are a number of bus services:

All content from Kiddle encyclopedia articles (including the article images and facts) can be freely used under Attribution-ShareAlike license, unless stated otherwise. Cite this article:
North Tawton Facts for Kids. Kiddle Encyclopedia.