Launceston (/ˈlɑːnstən/ LARN-stən or /ˈlɔːnstən/ LAWN-stən, locally /ˈlænsən/ LAN-sən or /ˈlɑːnsən/ LARN-sən, (Cornish: Lannstevan; (rarely spelled Lanson often as an abbreviation) is a town, ancient borough, and civil parish in east Cornwall, England, UK. It is one mile (1.6 km) west of the River Tamar, which constitutes almost the entire border between Cornwall and Devon, at its middle stage. Its gradients are generally steep particularly at a sharp south-western knoll topped by Launceston Castle.

The town centre is bypassed and is no longer physically a main thoroughfare. However, the town remains figuratively the "gateway to Cornwall", due to having one of the two dual carriageways into the county pass directly next to the town. The other dual carriageway and alternative main point of entry is at Saltash over the Tamar Bridge and was completed in 1962.

Launceston Steam Railway narrow-gauge heritage railway runs for aesthetic and industrial heritage purposes along a short rural route, it is popular with visitors during the summer months, but does not run for much of the year.

Two civil parishes serve the town and its outskirts, of which the central more built-up administrative unit housed 8,952 residents at the 2011 census.

Three electoral wards include reference to the town, their total population, from 2011 census data, being 11,837 and two ecclesiastical parishes serve the former single parish, with three churches and a large swathe of land to the north and west part of the area.

Launceston's motto is a reference to its adherence to the Cavalier cause during the English Civil War of the mid-17th century.

The Cornish name of "Launceston", Lannstevan, means the "church enclosure of St Stephen" and is derived from the former monastery at St Stephen's a few miles north-west (the castle and town were originally named Dunheved) and the Common Brittonic placename element lan-. Dunheved was the Southwestern Brittonic name for the town in the West Saxon period.

The earliest known Cornish mint was at Launceston, which operated on a minimal scale at the time of Æthelred the Unready before Cornwall received full diocesan jurisdiction in the year 994 AD. Only one specimen is known to exist. In the reign of William the Conqueror, the mint was moved to Dunheved and remained in existence until the reign of Henry II, 1160. During the reign of Henry III of England, another mint was established in Launceston.

Launceston Castle, in good repair, is a Norman motte-and-bailey castle, and was built by Robert, Count of Mortain (half-brother of William the Conqueror) c. 1070 to dominate the surrounding area. Launceston was the caput of the feudal barony of Launceston and of the Earldom of Cornwall until replaced by Lostwithiel in the 13th century. Launceston was later the county town of Cornwall until 1835 when Bodmin replaced it. The lands of Robert, Count of Mortain, became the core holdings of the feudal barony of Launceston, and the Fleming family continued to hold most of their manors from that barony, as can be seen from entries in the Book of Fees.

In Domesday Book (1086) it is recorded that Launceston was held by the Count of Mortain, and that he had his castle there. There was land for 10 ploughs, 1 villein and 13 smallholders with 4 ploughs, 2 mills which paid 40/- (£2 sterling) and 40 acres of pasture. The value of the manor was only £4 though it had formerly been worth £20.

The Roman Catholic martyr Cuthbert Mayne was executed at Launceston — a legacy of memorials and a church exists.

During the English Civil War Launceston was known to be Royale et Loyale to Charles I of England, hence its coat of arms. His son, who was later crowned Charles II of England, stayed in the town for a couple of days en route to the Cavalier army based further west.

In 1643, the Parliamentarian forces under the command of Major General James Chudleigh advanced in an attempt to capture Launceston from the Royalists. The Royalist commander, Ralph Hopton, 1st Baron Hopton, stationed his forces on the summit of Beacon Hill, a steep hill which overlooks the town. The Parliamentarians captured the foot of the hill, but were unable to dislodge the Royalist forces from the top. Hopton led a counterattack down the hill and, despite fierce fighting and the arrival of Parliamentary reinforcements, forced Chudleigh's troops to retreat.

Launceston has the only document in the UK signed by Mary II of England and her husband, William III of England. Launceston is said to have gained its historical importance from being the furthest into Cornwall that Justices and other Officers of the Crown felt safe to venture. (A more realistic reason was the very poor means of transport within Cornwall at the time which did not begin to be improved until the late 18th century.) When the situation had been improved Bodmin became the county town where the assizes were held (in 1835). Launceston's role as the de facto county town of Cornwall became established in the 13th century but it was never officially designated as the county town.

Viscount Launceston was a title of nobility created in 1726 (as Viscount of Launceston) but is now extinct. In the early 19th century, Launceston gave its name to the settlement, Launceston, Tasmania, which is now the second largest city in Tasmania. 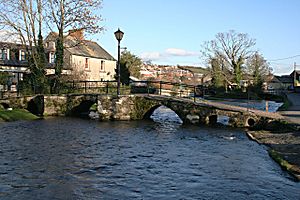 Prior's Bridge over the River Kensey

Launceston is a market town, castle, recreational and heritage railway visitor town and the main shopping centre for the adjoining rural areas of west Devon and east Cornwall. The town is mainly built on the south side of a large hill almost immune to flooding, unlike its northern neighbourhood, Newport in part on a slightly wider plain at the bottom of the hill, which is susceptible to flooding by the River Kensey.

The suburb of Newport is recorded for the first time during the 13th century. The natural advantages of the Launceston district had been recognised by the Anglo-Saxon monks of St Stephen and by the Norman lord of Cornwall in the reign of King William I. At this point in the course of the River Tamar it is joined by four tributaries within a short distance and its flood plain is relatively large, while further south the Tamar valley is narrow and meandering.

Launceston is connected to the A30 trunk route, a dual carriageway bypass carrying its road traffic south of the town. The bypass crosses the River Tamar on the Dunheved Bridge built in 1975-6 and substantially rebuilt 2006–7. Through this the town is approximately 42 miles (67 km) west of Exeter, 26 miles (42 km) north-east of Plymouth and 21 miles (34 km) east of the smaller regional centre of Bodmin. It is roughly midway between the north coast of Cornwall (at Bude) and the south coast (at Saltash).

Launceston civil parish comprises the town whereas St Stephens by Launceston Rural civil parish covers all outskirts, save for those south of the town. These each convene to discuss events funding, recreational funding and general planning matters.

Stourscombe SSSI, a geological Site of Special Scientific Interest, one mile to the east of Launceston, is designated ″... for the best inland exposure of the Upper Devonian in South West England and the type locality of the Stourscombe Beds (Upper Famennian).″

The poet Charles Causley was a native and long-standing resident of the town where he was both born and died. He was at one time contender for Poet Laureate and died in 2003, aged 86. He contributed the account of Launceston to a feature in the Sunday Times magazine called "Village England". He describes it as belonging to England rather than to Cornwall " Launceston is one of the most important towns in Daphne du Maurier's novel Jamaica Inn.

Launceston annually hosted the "Castle Rock" music festival in July, which took place on the lower grounds of the castle which overlooks the town (within the outer walls). As well as a vibrant mix of local bands, the 2006 festival was headlined by Capdown which massively improved the event's profile. The first concert was performed in 2000 and featured a young artist who was unknown at the time, Jamie Cullum. The festival was headlined on two occasions by local Rock band Syrup, who were signed to Great West Records, which was set up by Big Country bass player, Tony Butler, and his long term friend, Luke Maguire.

The Cornish & Devon Post is one of the newspapers for the district and its office is in the town. Local-specific editions of the paper and other publications are produced. It was founded in 1856 and incorporates the Launceston Weekly News. The Cornish Guardian North Cornwall edition covers Launceston. Four FM radio stations can be received: BBC Radio Cornwall, Pirate FM, Heart South West, and Radyo an Gernewegva (online or via large aerials). In December 2013 a periodic community audio magazine was incepted The Launceston Podcast with catch-up services online. 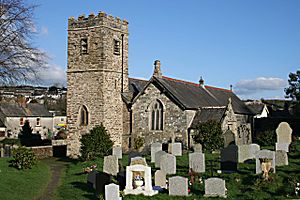 Three Anglican churches are in the town which has a united benefice and ecclesiastical parish covering Tregadillett three miles west, the same clergy alternating services to provide for a large attendance and operating a combined website.

The Grade I listed church of St Mary Magdalene was built in 1511–1524 by Sir Henry Trecarrel of Trecarrel near the town as a memorial to his infant son who died whilst being bathed. The ornate carvings in granite originally carved for the mansion he began to build at Trecarrel, Lezant have withstood the test of time. The tower dates from the 14th century, an earlier church and graveyard having occupied the site. Its grand organ was presented by a member of the Morice family of Werrington Park. The donor was either Sir William Morice, 3rd Baronet (1707–50) or his successor Humphry Morice MP (1723–85). The casework is elaborate, "a superb example of 18th century woodwork; the 18th century pipework is also of very high quality."

On St Stephen's Hill the main road through the north of the town is the Roman Catholic Church to Cuthbert Mayne (see #History) designed by Arthur Langdon in a blend of Byzantine and Romanesque. It was built in 1911 by local mason F H Nicholls of Lewannick, with carpentry by J H Harry, the oak doors by Mr Clifton of Ashwater, and the copper dome by T Chapman (Junior) of Launceston. The Lady Chapel was added in 1933.

Part of the town wall is still in existence including the South Gate of two arches. The White Hart Hotel incorporates a Norman doorway possibly removed from the Castle. New Bridge (early 16th century) crosses the River Tamar: it is of granite. Two old bridges cross the River Kensey: one mediaeval and one built in 1580. The Baptist chapel is late 18th century and a number of Georgian houses may also be seen.

Launceston is no longer connected to the national railway network, but was for almost a century served by two railway lines. The Great Western Railway (GWR) branch from Plymouth terminated in the town and the London and South Western Railway (LSWR) Exeter to Padstow North Cornwall Railway passed through. The stations were adjacent. The GWR station closed to passengers in 1952 after which all trains used the LSWR station until the North Cornwall line closed in 1966. The site of the station has been redeveloped for light industrial use. The Launceston Steam Railway narrow-gauge heritage railway uses an adjacent site and runs for 2.5 miles (4.0 km) westward to Newmills along the valley of the Kensey.

All content from Kiddle encyclopedia articles (including the article images and facts) can be freely used under Attribution-ShareAlike license, unless stated otherwise. Cite this article:
Launceston, Cornwall Facts for Kids. Kiddle Encyclopedia.