Lostwithiel ( Cornish: Lostwydhyel) is a civil parish and small town in Cornwall, England, United Kingdom at the head of the estuary of the River Fowey. According to the 2001 census it had a population of 2,739, increasing to 2,899 at the 2011 census. The Lostwithiel electoral ward had a population of 4,639 at the 2011 census. The name Lostwithiel comes from the Cornish "lostwydhyel" which means "tail of a wooded area".

Current thinking is that the name comes from the Old Cornish Lost Gwydhyel meaning "tail-end of the woodland". The view from Restormel Castle looking towards the town shows how this may have come to be.

Lostwithiel is an historic borough. The Lostwithiel constituency elected two members to the Unreformed House of Commons, but was disenfranchised by the Reform Act 1832. It remained a municipal borough until the 1960s, when it became a civil parish.

The seal of the borough of Lostwithiel was a shield charged with a castle rising from water between two thistles, in the water two fish, with the legend "Sigillum burgi de Lostwithyel et Penknight in Cornubia". Its mayoral regalia includes a silver oar, signifying its former jurisdiction over the River Fowey.

The town is situated in the Fowey river valley, positioned between the A390 road from Tavistock to Truro and the upper tidal reaches of the river.

Lostwithiel railway station is on the Cornish Main Line from Plymouth to Penzance. It is situated on the south side of the town, just across the medieval bridge. The line was originally built for the Cornwall Railway which built its main workshops here, but the surviving workshop buildings were transformed into apartments in 2004. A branch line takes china clay trains to Fowey.

The town contains the suburbs of Bridgend to the east and Rosehill and Victoria to the west of the River Fowey.

Lostwithiel's most notable buildings are St Bartholomew's Church and Restormel Castle. There is a small museum devoted to the history of the town. Once a stannary town, and for a period the most important in Cornwall, it is now much reduced in importance. There is a fine early fourteenth-century bridge with five pointed arches, and nearby the remains of the Lostwithiel Stannary Palace, with its Coinage Hall – this was the centre of royal authority over tin-mining, and 'coinage' meant the knocking off of the corner of each block of tin for the benefit of the Duchy of Cornwall. The small Guildhall has an arcaded ground floor. The old Grammar School has been converted into dwellings.

The town has a playing field known as King George V Playing Field. Lostwithiel has several large parks including Coulson Park which was named after Nathaniel Coulson (the San Francisco property magnate) who was raised in Lostwithiel after being abandoned by his father.

The town is host to a number of annual cultural activities including an arts and crafts festival, a beer festival, a week-long carnival in the summer, food and cider festivals in the October, and a Dickensian evening in December. 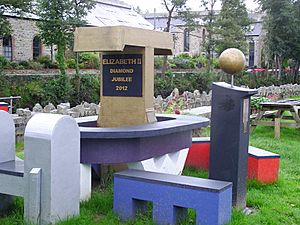 From Lostwithiel railway station trains operated by Great Western Railway run approximately every two hours towards Plymouth or Penzance. Some through services to and from London Paddington station and those operated by CrossCountry between Penzance and Scotland also stop.

National Express provides a regular coach service to London which runs via Plymouth for connections to other destinations. The coach stop is located outside the Royal Talbot Hotel.

Bus stops in Lostwithiel are outside the Royal Talbot Hotel and Cott Road phone box.

Lostwithiel looking from the west

Lostwithiel Educational Trust is a local charity which makes "grants to local schools and churches, as well as to individuals, for educational purposes"

All content from Kiddle encyclopedia articles (including the article images and facts) can be freely used under Attribution-ShareAlike license, unless stated otherwise. Cite this article:
Lostwithiel Facts for Kids. Kiddle Encyclopedia.