Restormel Castle (Cornish: Kastel Rostorrmel) lies by the River Fowey near Lostwithiel in Cornwall, England, UK. It is one of the four chief Norman castles of Cornwall, the others being Launceston, Tintagel and Trematon. The castle is notable for its perfectly circular design. Although once a luxurious residence of the Earl of Cornwall, the castle was all but ruined by the 16th century. It was briefly reoccupied and fought over during the English Civil War but was subsequently abandoned. It is now under the supervision of the English Heritage and open to the public. 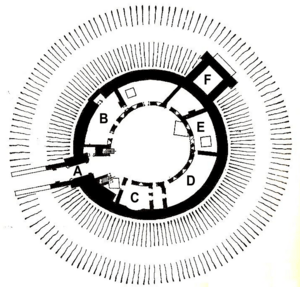 Located on a spur of high ground overlooking the River Fowey, Restormel Castle is an unusually well-preserved example of a circular shell keep, a rare type of fortification built during a short period in the 12th and early 13th centuries. Only 71 examples are known in England and Wales, of which Restormel Castle is the most intact of all. Such castles were built by converting a wooden motte-and-bailey castle through replacing the external palisade with a stone wall and filling the internal bailey with domestic stone buildings, clustered around the inside of the wall to form a defensive bailey; the buildings are curved to fit into the shell keep, in an extreme example of the 13th-century trend.

The wall measures 38 metres (125 ft) in diameter and is up to 2.4 metres (7.9 ft) thick. It still stands to its full height with a wall walk 7.6 metres (25 ft) above the ground, and the battlemented parapet is also reasonably intact. The wall is surrounded in turn by a ditch measuring 15 metres (49 ft) by 4 metres (13 ft) deep. Both the wall and the internal buildings were constructed from slate, which appears to have been quarried from the scarp face north-east of the castle. 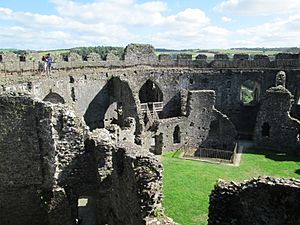 Looking across the courtyard of Restormel Castle. Opposite, a modern timber staircase leads to the chapel.

The domestic buildings within the wall included a kitchen, hall, solar, guest chambers, and an ante-chapel. Water from a natural spring was piped under pressure into the castle buildings. A square gate tower, largely ruined, guards the entrance to the inner castle, and may have been the first part of the original castle to have been partially constructed in stone. On the opposite side, a square tower projecting from the wall contains the chapel; it is thought to have been a 13th-century addition. It appears to have been converted into a gun emplacement during the English Civil War. A former external bailey wall, apparently constructed of timber with earthwork defences, has since been destroyed, leaving no trace. There are also historical references to a dungeon, also now vanished.

The castle appears to stand upon a motte; its massive walls were, unusually for the period, sunk deep into the original motte. The effect is heightened by a surrounding ringwork, subsequently filled in on the inner side so as to appear to heap against the castle wall. This may have occurred in the castle's later history to provide a garden walk around the ruin.

Restormel was part of the fiefdom of the Norman magnate Robert, Count of Mortain, located within the manor of Bodardle in the parish of Lanlivery. Restormel Castle was probably originally built after the Norman conquest of England as a motte and bailey castle around 1100 by Baldwin Fitz Turstin, the local sheriff. Baldwin's descendants continued to hold the manor as vassals and tenants of the Earls of Cornwall for nearly 200 years.

Constructed in the middle of a large deer park, the castle overlooked the primary crossing point over the River Fowey, a key tactical location; it may have been originally intended for use as a hunting lodge as well as a fortification, however. 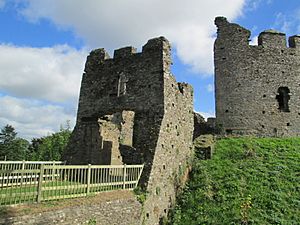 The gatehouse of Restormel Castle

Robert de Cardinham, lord of the manor between 1192–1225, then built up the inner curtain walls and converted the gatehouse completely to stone, giving the castle its current design. The village of Lostwithiel was established close to the castle at around the same time. The castle belonged to the Cardinhams for several years, who used it in preference to their older castle at Old Cardinham. Andrew de Cardinham's daughter, Isolda de Cardinham, finally married Thomas de Tracey, who then owned the castle until 1264.

The castle was seized in 1264 without fighting by Simon de Montfort during the civil conflicts in the reign of Henry III, and was seized back in turn by the former High Sheriff of Cornwall, Sir Ralph Arundell, in 1265. After some persuasion, Isolda de Cardinham granted the castle to Henry III's brother, Richard of Cornwall in 1270. Richard died in 1271, and his son Edmund took over Restormel as his main administrative base, building the inner chambers to the castle during his residence there and titling it his "duchy palace". The castle in this period resembled a "miniature palace", with luxurious quarters and piped water. It was home to stannary administration and oversaw the local, profitable tin-mines in the village.

Crown ownership and fall into ruin 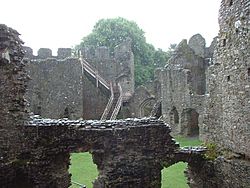 The inner chambers of Restormel Castle

After Edmund's death in 1299 the castle reverted to the Crown, and from 1337 onwards the castle was one of the 17 antiqua maneria of the Duchy of Cornwall. It was rarely used as a residence, although Edward the Black Prince stayed at the castle in 1354 and 1365. The prince used these occasions to gather his feudal subjects at the castle in order for them to pay him homage. After the loss of Gascony, one of the key possessions of the Duchy, the contents of the castle were stripped out and removed to other residences. With an absent lord, the stewardship of the castle became much sought after as a result, and the castle and its estate became known for its efficient administration.

The castle is recorded as having fallen into disrepair in a 1337 survey of the possessions of the Duchy of Cornwall. It was extensively repaired by order of the Black Prince but declined again following his death in 1376. By the time the antiquary John Leland saw it in the 16th century, it had fallen into ruin and had been extensively robbed for its stonework; as he put it, "the timber rooted up, the conduit pipes taken away, the roofe made sale of, the planchings rotten, the wals fallen down, and the hewed stones of the windowes, dournes, and clavels, pluct out to serve private buildings; onely there remayneth an utter defacement, to complayne upon this unregarded distresse."

Henry VIII converted the castle's parkland back into ordinary countryside. With the castle out of use, a manor house was established during the 16th century a short distance away on lower-lying land adjoining the river. It is said to have been built on the site of a chapel dedicated to the Trinity that was destroyed during the English Reformation. Restormel Manor, now a grade II listed building, is still owned by the Duchy of Cornwall and is subdivided into luxury apartments with holiday accommodation in the outbuildings; the then Kate Middleton stayed there during the Christmas of 2009 and won a landmark victory over a paparazzo who photographed her there.

Restormel has seen action only once during its long history, when a Parliamentary garrison occupied the crumbling ruins and made some basic repairs during the Civil War. It was invested by an opposing force loyal to Charles I, led by Sir Richard Grenville, a local member of the gentry who had been the member of Parliament for Fowey before the war. Grenville stormed the castle on 21 August 1644, whilst manoeuvring to encircle Parliamentary forces. It is not clear whether it was subsequently slighted but in an Parliamentary survey of 1649, it was recorded to be utterly ruined with only the outer walls still standing, and was deemed to be too badly ruined to be repaired and too worthless for there to be any value in demolishing it.

By the 19th century it had become a popular attraction for visitors. The French writer Henri-François-Alphonse Esquiros, who wrote about a visit to the castle in 1865, described the ruins as forming "what the English call a romantic scene." He noted that the ivy-covered ruins attracted visitors from the environs who went there "for picnics and parties of pleasure". In 1846 the British royal family visited the castle; arriving on their yacht the Victoria and Albert up the River Fowey, the royal party toured the ruins.

In 1925, Edward, Duke of Cornwall – the later King Edward VIII – entrusted the ruin to the Office of Works. In 1971 a proposal was made that the castle should be restored but was dropped after attracting strong opposition. A decade later, the castle was designated as a Scheduled Monument. It has never been formally excavated. It is now maintained by English Heritage as a popular tourist attraction and picnic site.

Panorama of the castle interior

All content from Kiddle encyclopedia articles (including the article images and facts) can be freely used under Attribution-ShareAlike license, unless stated otherwise. Cite this article:
Restormel Castle Facts for Kids. Kiddle Encyclopedia.