Chagford is a market town and civil parish on the north-east edge of Dartmoor, in Devon, England, close to the River Teign. It is located off the A382, about 4 miles (6 km) west of Moretonhampstead. The name Chagford is derived from the word chag, meaning gorse or broom, and the ford suffix indicates its importance as a crossing place on the River Teign. At the 2001 Census it had a population of 1,470 which decreased at the 2011 census to 1,449.

Archaeological remains confirm that a community has existed here for at least 4000 years. In historical times, Chagford grew due to the wool trade and from tin mining in the area. A weekly market was held here from before 1220, and a livestock market in the town survived until the 1980s. In 1305 it was made a stannary town where tin was traded. Among the most prominent tin-mining families in the 16th century were the Endecotts, Knapmans, Whiddons and Lethbridges.

In a Civil War skirmish Sydney Godolphin, the poet and Royalist MP for Helston, was shot and killed in the porch of the Three Crowns.

In 1987, the New Scientist reported that Chagford contained "the most radioactive loo in the world", a reference to the high levels of Radon gas in this granite area.

The parish of Chagford comprises historic estates including:

Today Chagford is a thriving community with high property prices, busy streets, and an unusually wide range of shops for a town of this size, although not immune to national trends having lost its post office and banks. Two large hardware stores side-by-side in the town square were run by the same two families for over a century, but one of these closed in 2017. It is also known for its arts community, celebrated through the autumn Chagford Film Festival, the springtime Chagword literary festival (every two years), the summer's Chagstock Music Festival, the annual Wonderworks crafts weekend, and other regular cultural events. There are several tea rooms and whole food cafés, one Bangladeshi restaurant, and four pubs. There are numerous guest houses and hotels in the surrounding countryside. These provide accommodation for the large influx of visitors during the year.

A 16th century building called Endecott House, on the edge of the town square, was given this name in the early 1990s in honour of Pilgrim Father and governor of Massachusetts Bay Colony, John Endecott, who lived in Chagford before leaving for the New World. This building was possibly built as a "church house", and has certainly been in community use for many years, including use as a village school. It now serves as a meeting hall.

One of the social centres of Chagford is the village hall, the Jubilee Hall, in the south-east corner of the town next to the public car park. Built in 1936 by public subscription, it also houses the library (which opens three part-days a week). It provides a venue for the regular Friday morning flea markets as well as other activities such as badminton, table tennis, parties, discos, comedy nights, kung fu, Pilates, etc. The town is beginning to outgrow this Hall, and it is being extended during 2016 and 2017.

The Three Crowns Hotel dates to the 13th century and is reportedly haunted by the ghost of the cavalier poet, Sidney Godolphin, who was fatally wounded there in the English Civil War.

Easton Court is the hotel in which Evelyn Waugh wrote Brideshead Revisited, the last line of which reads Chagford, February–June, 1944. 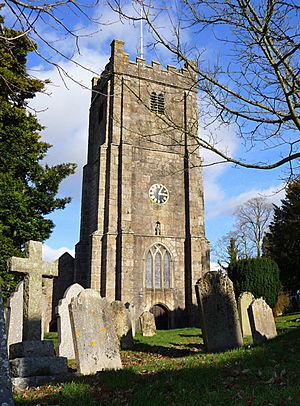 The church of St Michael the Archangel

The Anglican parish church of St Michael the Archangel was dedicated in 1261, although little remains from this period. The tower dates back to the 15th century. The Grade I listed building was restored in 1865 and extended during the 20th century. It features carved roof bosses, similar to those found at St. Pancras' church, Widecombe-in-the-Moor, including the tin miners’ emblem of three hares.

Chagford forms part of a "united benefice" of seven ecclesiastical parishes, known as The Whiddon Parishes of Dartmoor, the others being Throwleigh, Gidleigh, Drewsteignton, Spreyton, Hittisleigh and South Tawton.

A Wesleyan Chapel (est. 1834) was replaced by a Methodist church built in 1861; it closed in the 1990s and is now in secular use. Victorian era directories list a Baptist church (established 1829), but long since disappeared. However, the Bible Christian Chapel (est. 1844) continues to flourish as Chagford Gospel Church, and a purpose-built Roman Catholic church was founded in 1963.

All content from Kiddle encyclopedia articles (including the article images and facts) can be freely used under Attribution-ShareAlike license, unless stated otherwise. Cite this article:
Chagford Facts for Kids. Kiddle Encyclopedia.