Moretonhampstead (anciently Moreton Hampstead) is a market town, parish and ancient manor in Devon, situated on the north-eastern edge of Dartmoor, within the Dartmoor National Park. The parish now includes the hamlet of Doccombe, and it is surrounded clockwise from the north by the parishes of Drewsteignton, Dunsford, Bridford, Bovey Tracey, Lustleigh, North Bovey and Chagford.

The Domesday Book of 1086 records the manor as MORTONE. This part of the name derives from the Old English for a farmstead in moorland, referring to the town's situation on the edge of Dartmoor. By 1493 "Hampstead" had been added to the name. This addition simply means "homestead", and The Oxford Names Companion (1991) speculates that this may be a family name, or a nearby place. However The Cambridge Dictionary of English Place-Names (2004) simply says the reason for the addition is unknown.

The central region of Devon was occupied by the Saxons soon after 682 AD. It was divided into vast estates, and one of these divisions included all land within the boundaries of the rivers Teign and Bovey, with Moreton as its major settlement. The present parish of over 6,000 acres (24 km2) is the residue of that ancient royal estate. It remained a royal estate immediately after the Norman Conquest of 1066, as is recorded in the Domesday Book of 1086, where it is listed as the 45th of the 72 Devonshire holdings of King William the Conqueror. The manor was held by grand serjeanty from the king by Richard de Burgh, 2nd Earl of Ulster (1259–1326) during the reign of King Edward I (1272-1307), for the annual yielding of one sparrow hawk. After that time it was the seat of Sir Philip de Courtenay (d.1314), killed at the Battle of Stirling[disambiguation needed], second son of Sir Hugh de Courtenay (died 1292) feudal baron of Okehampton, by his wife Eleanor le Despenser (died 1328), sister of Hugh le Despenser, 1st Earl of Winchester, and younger brother of Hugh de Courtenay, 1st/9th Earl of Devon (1276–1340) of Tiverton Castle. He died without progeny when Moreton Hampstead was inherited by his elder brother the 1st Earl of Devon, who gave Moreton Hampstead to his third son Robert de Courtenay, who made it his seat. Robert's grandson William de Courtenay (1377-1388) died without progeny, and eventually the manor became the property of Sir Philip Courtenay (1340–1406) of Powderham, 5th or 6th son of Hugh Courtenay, 2nd Earl of Devon (1303–1377). Thenceforth it descended with Powderham and in the time of Pole (d.1635) was a possession of Francis Courtenay (1576–1638), de jure 4th Earl of Devon.

Wool and (in later years) the manufacture of woollen cloth formed the basis of the town's economy for over 700 years. The economy was evidently healthy when the town established a water-powered fulling mill before the end of the 13th century.

In 1207 King John granted a weekly market and an annual five-day fair, indicating that Moretonhampstead had developed into an important local community. The town grew steadily through the Middle Ages and remained prosperous until the end of the 17th century, when the wool industry began to decline. The town continued to be a local trading centre and a rest stop for travellers on the difficult routes across Dartmoor and from Exeter and Newton Abbot.

A series of fires in the 20th century destroyed many of Moretonhampstead's ancient buildings, but sufficient still remains to demonstrate the Saxon and Medieval heritage, and the later industrial prosperity. Much of the town is designated a conservation area, with many listed buildings of architectural and historic interest. The whole parish is within Dartmoor National Park.

When King John granted the town its charter during the 13th century, the rent was set as one sparrowhawk per year. The bird has become something of a symbol for the town and will be incorporated into works of public art under development by an artist in residence Roger Dean. 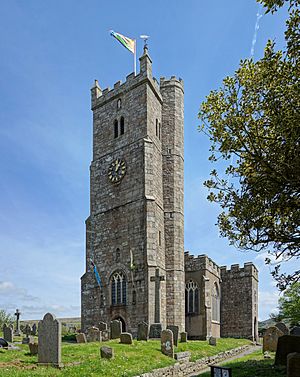 The Cross Tree, immortalised by R. D. Blackmore in his 1882 novel Christowell, is now only represented by a cross minus its shaft, which is enclosed near the almshouses. This famous dancing tree, a fine old elm, cut and clipped in the form of a punch bowl (by which name it was also known), has long since disappeared, and in its place a beech tree has been planted. It was around the original tree that the village lads and lasses would dance and it recorded that French officers on parole from Dartmoor Prison at Princetown during the Napoleonic Wars, "did assemble around the Cross Tree with their Band".

Standing behind the Cross Tree are the famous almshouses, built in solid granite. The date of 1637 on the outside is actually the date they were refurbished. Recent research has shown that the main core of these buildings are at least two hundred years older. Early in the 19th century the building was converted from two tenements into four and the facade was damaged. By 1938 they had fallen into disrepair. In 1940 they were purchased for the town and converted back into two tenements. In 1952 they were purchased by the National Trust.

The granite Church dedicated to St Andrew dates from the mid-15th century. It is a grade I listed building.

Moretonhampstead relies heavily on tourism, and has done so for a long time. Its position makes it a base to explore both Dartmoor and Devon. The central part of the town stands at an altitude of 700 feet (210 m) but a short stroll within the parish will elevate the walker to beyond 1,100 feet (340 m) and afford views of the surrounding area. Moretonhampstead has four pubs and two cafes. There is a wide selection of hotels, bed and breakfast, self-catering and camping accommodation.

Moretonhampstead has a good range of sporting facilities and the proximity of Dartmoor makes it popular with ramblers and cyclists, in particular for mountain biking.

Moretonhampstead's Flag Festival began in 2011 when two local artists, with funding support from Dartmoor National Park's Sustainable Development Fund, established a group of interested participants. In the first year, between them they made over forty flags in open-access community workshops. Each winter they repeat the exercise, flags are repaired and new ones made to add to the collection. The growing community of flag makers take pride in seeing their work transform the town into an open-air gallery for visitors and residents to enjoy. Sewn from fabric salvaged from thrown away festival-goer's tents, and off-cuts from the Cameron Balloon Factory in Bristol, each flag tells a unique story relating to the landscape, local business, personal interest, or connection to the town and surrounding moorland. The flagpoles are harvested and made locally from a sustainable woodland. The Flag Festival runs for the duration of March.

Moretonhampstead also has an annual carnival, held on the fourth Thursday in August which raises funds for local groups and associations.

Other events include a fireworks night, annual pantomime, food and drink festival and music events spread throughout the year

Moretonhampstead railway station was opened by the Moretonhampstead and South Devon Railway on the south side of the town on 26 June 1866. It closed to passengers on 28 February 1959, although goods trains continued until 6 April 1964. After this the goods shed and engine shed continued to be used for many years by a commercial road haulage business.

Bus services are from the car park just west of the town centre and include services to Exeter (359/173) and Okehampton/Newton Abbot (178).

Moretonhampstead has King George's Field, a memorial to King George V. This facility includes indoor courts for basketball etc., a gym and also conference rooms to rent. It has cricket fields a camping site, football facilities and a skate park.

All content from Kiddle encyclopedia articles (including the article images and facts) can be freely used under Attribution-ShareAlike license, unless stated otherwise. Cite this article:
Moretonhampstead Facts for Kids. Kiddle Encyclopedia.