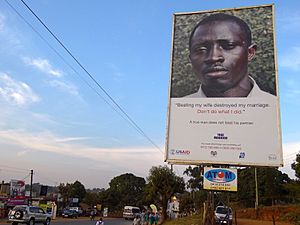 A campaign poster against domestic violence in Uganda. The sign reads: Beating my wife destroyed my marriage, don't do what I did.

Domestic violence means that in a relationship or marriage, one or both of the partners uses physical or psychological violence to try to get power or control over the other or due to losing their temper. There is often a predictable pattern or cycle of violence in a relationship and the abuse tends to get worse over time.

All content from Kiddle encyclopedia articles (including the article images and facts) can be freely used under Attribution-ShareAlike license, unless stated otherwise. Cite this article:
Domestic violence Facts for Kids. Kiddle Encyclopedia.