Presidential campaign button for Abraham Lincoln, 1860. The reverse side of the button shows a portrait of his running mate Hannibal Hamlin.

A campaign is trying to do something. Some battles in wars are called campaigns. The word comes from "Campania", a region where the ancient Roman army often fought.

A campaign usually involves groups of people following a plan and working together in different ways to get what they want.

When someone in politics seeks election to a political office, that is called a "political campaign". Sometimes, a series of advertisements can be referred to as an "advertising campaign".

A "blood drive", when the Red Cross or a hospital asks people to give blood, is also a campaign. 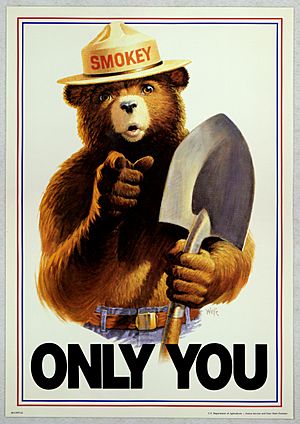 Smokey Bear is the icon of the U.S. Forest Service's long-running campaign against wildfires.

An advertising campaign is a series of advertisement messages that share a single idea and theme which make up an integrated marketing communication.

A Military campaign is a series of battles in a particular area within a certain period of time. Usually, one army is trying to capture the area from another army. A war can have several campaigns.

All content from Kiddle encyclopedia articles (including the article images and facts) can be freely used under Attribution-ShareAlike license, unless stated otherwise. Cite this article:
Campaign Facts for Kids. Kiddle Encyclopedia.