Crossville is a city in and the county seat of Cumberland County, Tennessee, United States. It is part of the Crossville, TN Micropolitan Statistical Area. The population was 10,795 at the 2010 census.

Crossville developed at the intersection of a branch of the Great Stage Road, which connected the Knoxville area with the Nashville area, and the Kentucky Stock Road, a cattle drovers' path connecting Middle Tennessee with Kentucky and later extending south to Chattanooga. These two roads are roughly paralleled by modern US-70 and US-127, respectively.

1939 photo of Crossville's Piggly Wiggly, which at the time was located at the corner of Main and 2nd

Around 1800, an early American settler named Samuel Lambeth opened a store at this junction, and the small community that developed around it became known as Lambeth's Crossroads. The store was located at what has become the modern intersection of Main Street and Stanley Street, just south of the courthouse. By the time a post office was established in the 1830s, the community had taken the name of "Crossville". In the early 1850s, James Scott, a merchant from nearby Sparta, purchased the Lambeth store and renamed it Scott's Tavern.

When Cumberland County was formed in 1856, Crossville, being nearest the center of the county, was chosen as county seat. Scott donated the initial 40 acres (160,000 m2) for the erection of a courthouse and town square.

Crossville and Cumberland County suffered rampant pillaging throughout the Civil War as the well-developed roads made the area accessible to both occupying Union and Confederate forces and bands of renegade guerrillas. With divided communities and families, there was vicious guerrilla warfare, and residents suffered as if there were major battles in the area. The county was divided throughout the conflict, sending a roughly equal number of troops to both sides.

After World War I, U.S. 70 helped connect the town and area to markets for its produce and goods. Additional highways built after World War II improved transportation in the region.

During the Great Depression, the federal government's Subsistence Homestead Division initiated a housing project south of Crossville known as the Cumberland Homesteads. The project's purpose was to provide small farms for several hundred impoverished families. The project's recreational area would later become the nucleus for Cumberland Mountain State Park.

Crossville has long been a great crossroads of East and Middle Tennessee.

Crossville is located at the center of Cumberland County at 35°57′15″N 85°1′53″W﻿ / ﻿35.95417°N 85.03139°W﻿ / 35.95417; -85.03139 (35.954221, -85.031267). The city is situated atop the Cumberland Plateau amidst the headwaters of the Obed River, which slices a gorge north of Crossville en route to its confluence with the Emory River to the northeast. Crossville is roughly halfway between the plateau's eastern escarpment along Walden Ridge and its western escarpment along the Highland Rim. Several small lakes are located on the outskirts of Crossville, including Lake Tansi to the south, Lake Holiday to the west, and Byrd Lake at nearby Cumberland Mountain State Park. The average elevation of Crossville is approximately 1,890 feet (580 m) above sea level.

Crossville developed at the intersection of two major stage roads by which settlers moved through the area. The roads were gradually widened, improved and turned into paved roads. Two major federal highways: U.S. Route 70, which traverses Tennessee from east to west, and U.S. Route 127, which traverses Tennessee from north to south, now roughly follow the old routes. Interstate 40, which runs roughly parallel to U.S. 70, passes through the northern part of Crossville. Crossville is approximately 35 miles (56 km) east of Cookeville, 80 miles (130 km) north of Chattanooga, and 70 miles (110 km) west of Knoxville.

There were 3,795 households out of which 27.4% had children under the age of 18 living with them, 45.2% were married couples living together, 15.5% had a female householder with no husband present, and 35.7% were non-families. 31.3% of all households were made up of individuals and 13.1% had someone living alone who was 65 years of age or older. The average household size was 2.25 and the average family size was 2.79.

Recent population estimates show the population of Crossville around 11,498 in 2008. 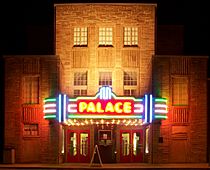 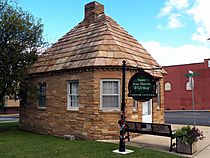 Native Stone Museum, one of many buildings in Crossville built of Crab Orchard Stone

All content from Kiddle encyclopedia articles (including the article images and facts) can be freely used under Attribution-ShareAlike license, unless stated otherwise. Cite this article:
Crossville, Tennessee Facts for Kids. Kiddle Encyclopedia.