He didn’t enter the draft he was just randomly picked. He was walking down campus when someone told him he was picked in the draft 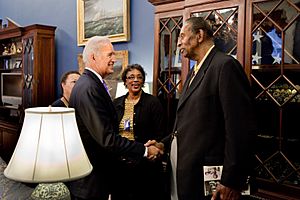 Earl Francis Lloyd (April 3, 1928 – February 26, 2015) was an American professional basketball player. He was the first black person to play in the National Basketball Association, in the 1950–51 NBA season. Three other African Americans played in the same season: Chuck Cooper, Nathaniel Clifton, and Hank DeZonie.

All content from Kiddle encyclopedia articles (including the article images and facts) can be freely used under Attribution-ShareAlike license, unless stated otherwise. Cite this article:
Earl Lloyd Facts for Kids. Kiddle Encyclopedia.