Cumberland Homesteads is a community located in Cumberland County, Tennessee, United States. Established by the New Deal-era Division of Subsistence Homesteads in 1934, the community was envisioned by federal planners as a model of cooperative living for the region's distressed farmers, coal miners, and factory workers. While the cooperative experiment failed and the federal government withdrew from the project in the 1940s, the Homesteads community nevertheless survived. In 1988, several hundred of the community's original houses and other buildings, which are characterized by the native "crab orchard" sandstone used in their construction, were added to the National Register of Historic Places as a historic district.

By the early 1930s, decades of poor farming practices had rendered many of the small farms in East Tennessee untenable, and the Great Depression had left thousands of coal miners and other industrial workers unemployed. In January 1934, the Division of Subsistence Homesteads chose Cumberland County as a site for one of its "stranded" agricultural communities, in which families were resettled on small farms and would work in community-owned businesses. Most of the cooperative ventures failed, however, and after World War II the government divested itself of the project. The community's general layout still appears much as it did in the late 1930s.

The passage of the National Industrial Recovery Act in 1933 created the Division of Subsistence Homesteads and gave the Roosevelt Administration $25,000,000 to purchase land for the creation of small farming communities for the nation's displaced workers. The Division focused on three types of settlements— communities of part-time farmers near wage-earning employment, communities of farmers resettled from unproductive land, and communities of "stranded" industrial workers, namely miners and loggers. The latter type, which eventually included Cumberland Homesteads, drew the most criticism, as many believed such communities would never be self-supporting. 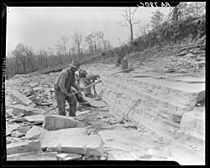 Cumberland County farm agent Robert Lyons led a local committee that drew up a proposal for a homestead community, which it submitted to the Division of Subsistence Hometeads in December 1933. Lyons had likely been influenced by earlier Plateau-area "back to the land" experiments, such as the Clifty Consolidated Coal Company's 1917 program that helped Fentress County miners purchase small farms, as well as relief efforts provided by local Quakers. Due in part to the influence of Tennessee Valley Authority chairman and cooperative living proponent Arthur Morgan, the Division of Subsistence Homesteads accepted the Cumberland County proposal in January 1934. Over 20,000 acres (81 km2) of land south of Crossville were purchased from the Missouri Land Company, and Cumberland Homesteads, Inc., was created to administer the project.

The Civil Works Administration immediately hired several hundred locals to prepare the newly acquired land, providing wages that effectively ended the Great Depression in Cumberland County. Of the initial 233 families selected for the Cumberland Homesteads project, 30% were distressed farmers, 30% were unemployed miners, 30% were unemployed textile workers, and 10% were struggling professionals (including teachers, nurses, and a doctor). Tennessee Valley Authority (TVA) architect William Macy Stanton, who designed a number of buildings in TVA's planned city of Norris, drew up basic designs for houses and other buildings at the Homesteads. The Civilian Conservation Corps built recreational buildings and a small lake for the community at what is now Cumberland Mountain State Park. By late 1934, the community's first stone houses had been completed.

Buildings at Cumberland Homesteads were constructed using primarily a locally-quarried sandstone known as "crab orchard" stone, which is known for its durability and reddish hue in late afternoon sunlight. The most notable building in Cumberland Homesteads is the Homesteads Tower, a cross-shaped building centered around an eight-story octagonal water tower. This building originally housed the Homesteads offices, and is now home to the Homesteads Tower Museum. The elementary school and high school, located behind the Homesteads Tower, consist of unique pod-style designs, with detached classrooms and workshops connected by covered walkways. Both school complexes are now part of Homestead Elementary School. The cannery and hosiery mill have both been modified to the extent that they are not considered contributing properties to the historic district, although their respective water towers are considered contributing structures.

Most of the original 251 houses are still standing. Fifteen distinct housing designs have been identified, with eleven of the designs found multiple times, as they followed basic patterns provided by William Macy Stanton. Stanton's designs include rectangular houses, L-shaped houses, and T-shaped houses, most of which are 1.5 stories with gable roofs and one or two chimneys. Most houses originally had covered-porch entrances and batten doors. Typical interiors consisted of pine paneling with built-in bookcases. Attics contained water storage tanks, and most houses were wired in anticipation of TVA providing electrical power. Most farmsteads included a barn (with either gable or gambrel-roof design), a smokehouse, a chicken house, and toolsheds.

All content from Kiddle encyclopedia articles (including the article images and facts) can be freely used under Attribution-ShareAlike license, unless stated otherwise. Cite this article:
Cumberland Homesteads Facts for Kids. Kiddle Encyclopedia.