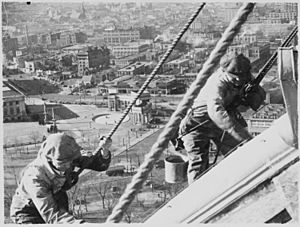 The Civil Works Administration (CWA) was a program that created jobs. It did not last long. It was created by the New Deal during the Great Depression. The jobs were manual-labor jobs for millions of unemployed workers. The jobs were temporary, meaning the workers didn't work for a very long time. This lasted during winter of 1933–34. President Franklin D. Roosevelt told everyone about the CWA on November 8, 1933, and put Harry L. Hopkins in charge of it.

The CWA was a project created from the Federal Emergency Relief Administration (FERA). The CWA created construction jobs, mainly making new buildings and bridges (or making them better). It ended on March 31, 1934. $200 million per month was spent. It gave jobs to four million people.

All content from Kiddle encyclopedia articles (including the article images and facts) can be freely used under Attribution-ShareAlike license, unless stated otherwise. Cite this article:
Civil Works Administration Facts for Kids. Kiddle Encyclopedia.