Johnny Reid "John" Edwards (born June 10, 1953) is an American lawyer and former politician who served as a U.S. Senator from North Carolina. He was the Democratic nominee for Vice President in 2004, and was a candidate for the Democratic presidential nomination in 2004 and 2008.

Edwards defeated Republican Lauch Faircloth in North Carolina's 1998 Senate election. Towards the end of his single six-year term, he sought the Democratic Party's nomination in the 2004 presidential election. He eventually became the 2004 Democratic candidate for vice president, the running mate of presidential nominee Senator John Kerry of Massachusetts.

Following Kerry's loss to President George W. Bush, Edwards began working full-time at the One America Committee, a political action committee he established in 2001, and was appointed director of the Center on Poverty, Work and Opportunity at the University of North Carolina at Chapel Hill School of Law. He was also a consultant for Fortress Investment Group LLC. 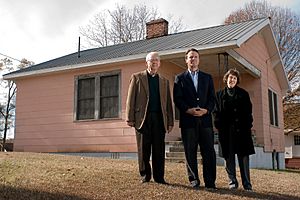 Edwards and his parents stand in front of his childhood home

Edwards was born in Seneca, South Carolina. The family moved several times during Edwards' childhood, eventually settling in Robbins, North Carolina, where his father worked as a textile mill floor worker, eventually promoted to supervisor; his mother had a roadside antique-finishing business and then worked as a postal letter carrier when his father left his job.

A football star in high school, Edwards was the first person in his family to attend college. He attended Clemson University and transferred to North Carolina State University. Edwards graduated with high honors, earning a bachelor's degree in textile technology in 1974, and later earned his Juris Doctor from the University of North Carolina School of Law (UNC) with honors. 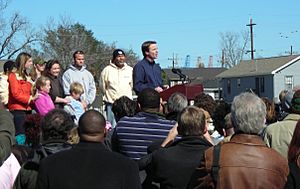 Before his time in the Senate, he was a lawyer. He argued and won several big cases about doctors who gave bad care and caused harm to patients. He also won lawsuits for people who had been injured by negligence of businesses or by using their products.

His best known case was for a Cary, North Carolina three year old girl. She was badly injured by being sucked into an open drain in a swimming pool playpool for toddlers. Her family won enough money from the drain company to pay for her medical care for the rest of her life.

In December 2003, during his first presidential campaign, Edwards (with John Auchard) published Four Trials, an autobiographical book focusing on cases from his legal career. According to this book, the success of the Sta-Rite case and his son's death (Edwards had hoped his son would eventually join him in private law practice) prompted Edwards to leave the legal profession and seek public office. 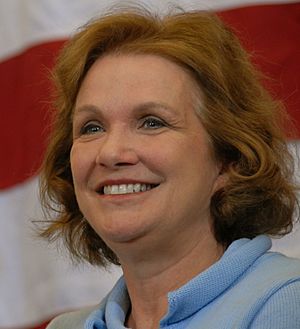 His eldest son died in a car accident when strong winds swept his Jeep off a North Carolina highway in 1996. Three weeks before his death, Wade was honored by First Lady Hillary Clinton at The White House as one of the 10 finalists in an essay contest sponsored by the National Endowment for the Humanities and the Voice of America for an essay he wrote on entering the voting booth with his father. Edwards and his wife began the Wade Edwards Foundation in their son's memory; the purpose of the non-profit organization is "to reward, encourage, and inspire young people in the pursuit of excellence." The Foundation funded the Wade Edwards Learning Lab at Wade's high school, Needham B. Broughton High School in Raleigh, along with scholarship competitions and essay awards.

Edwards has returned to law after his political career ended. Together with attorneys David Kirby and William Bystrynski, he founded the law firm Edwards Kirby in Raleigh. His daughter Cate is the managing attorney of the San Diego office of the firm.

All content from Kiddle encyclopedia articles (including the article images and facts) can be freely used under Attribution-ShareAlike license, unless stated otherwise. Cite this article:
John Edwards Facts for Kids. Kiddle Encyclopedia.