The Democratic Vice-Presidential candidate for 2004, former United States Senator from North Carolina, John Edwards, was born in Seneca. It was named for the nearby Cherokee town of Isunigu, known to the English as "Seneca Town". 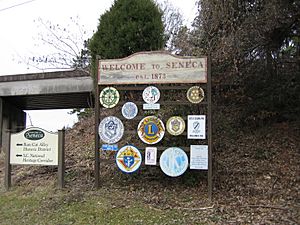 Seneca was founded as Seneca City and named for a nearby Native American village and the Seneca River. The town was located at the intersection of the Blue Ridge Railroad and the newly built Atlanta and Charlotte Air Line Railroad. Both lines are now part of the Norfolk Southern Railway. A. W. Thompson and J. J. Norton, who were locating engineers for the Air Line Railroad, purchased the land from Col. Brown of Anderson, South Carolina. A stake marking the center of town was driven into the intersection of the railroad tracks and the current Townville Street. The land was divided into lots for one-half mile from the stake. An auction was held on August 14, 1873. The town was given a charter by the state legislature on March 14, 1874. In 1908, the name was changed to Seneca. 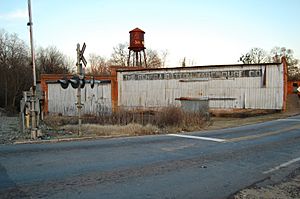 Old Cotton Warehouse. The right hand section of the warehouse burned in April 2008 and has been torn down.

Seneca developed as a marketing and shipping point for cotton. During the harvest, wagons bringing cotton would line up for blocks from the railroad station. A passenger terminal, several hotels, and a park were built near the railroad tracks. Recently, this park was named the Norton-Thompson Park in honor of its founders.

The first school was built in 1874. The community was the home of the Seneca Institute - Seneca Junior College, which was an African-American school from 1899 to 1939. 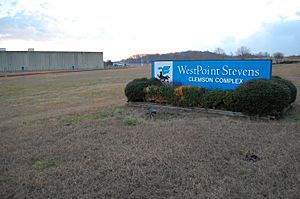 Westpoint Stevens Plant, January 2008. Demolition of the mill began in the spring of 2008.

Textile mills came into the area with the construction of a plant-and-mill village by the Courtenay Manufacturing Company in Newry on the Little River in 1893. W.L. Jordon built another textile plant and mill village east of Seneca. This village has been called Jordania, Londsdale, and Utica as the ownership of the plant changed. The J. P. Stevens Plant, which was later called the Westpoint Stevens Plant, was a large integrated textile mill built on Lake Hartwell. Many other textile mills came to the area. These plants were the main industry for Seneca for the first half of the twentieth century. Nearly all these textile plants have been closed.

With the construction of Lake Hartwell in 1963, Lake Keowee in 1971, and Lake Jocassee in 1974, Seneca and the area saw dramatic changes. The Oconee Nuclear Station was built on Lake Keowee. The recreation provided by the lakes and other attractions such as nearby Clemson University brought many retirees from other parts of the country. Retirement communities have been built in the area.

In an around Seneca, there are a number of historic buildings and districts that are on the National Register of Historic Places:

Seneca Historic District was listed in 1974. It is located south of the railroad tracks. The district consists of a number of homes and three churches that were built in the late nineteenth and early twentieth centuries. The houses have architectural styles that were popular in the period. It also includes a log cabin from the mid nineteenth century that was moved from Long Creek, South Carolina. The South Carolina Department of Archives and History has additional pictures and information, copies of the nomination forms, and a map of the district.

There were 3,286 households out of which 27.4% had children under the age of 18 living with them, 42.2% were married couples living together, 17.5% had a female householder with no husband present, and 36.2% were non-families. Of all households 32.3% were made up of individuals and 13.2% had someone living alone who was 65 years of age or older. The average household size was 2.32 and the average family size was 2.93.

All content from Kiddle encyclopedia articles (including the article images and facts) can be freely used under Attribution-ShareAlike license, unless stated otherwise. Cite this article:
Seneca, South Carolina Facts for Kids. Kiddle Encyclopedia.