Lake Hartwell is a man-made reservoir bordering Georgia and South Carolina and encompassing parts of the Savannah, Tugaloo, and Seneca rivers. Lake Hartwell is one of the southeast's largest and most popular recreation lakes. The lake is created by construction of the Hartwell Dam, completed in 1962 and located on the Savannah River seven miles (11 km) below the point at which the Tugaloo and Seneca Rivers join to form the Savannah. Extending 49 miles (79 km) up the Tugaloo and 45 miles (72 km) up the Seneca at normal pool elevation, the lake comprises nearly 56,000 acres (230 km²) of water with a shoreline of 962 miles (1,548 km). The entire Hartwell "Project" contains 76,450 acres (309 km²) of land and water. I-85 bisects Hartwell Lake and makes the area easily accessible to visitors.

The Flood Control Act of 17 May 1950 authorized the Hartwell Dam and Reservoir as the second unit in the comprehensive development of the Savannah River Basin. The estimated cost was $68.4 million based on 1948 price levels and preliminary designs. The original project provided for a gravity-type concrete dam 2,415 feet (736 m) long with earth embankments at either end, which would be 6,050 feet (1,840 m) long on the Georgia side and 3,935 feet (1,199 m) long on the South Carolina side. The 12,400 foot (3,800 m) long dam was to be topped with a roadway 24 feet (7.3 m) wide. The main dam was to consist of two non-overflow concrete sections on the right and left banks 887 feet (270 m) and 940 feet (290 m) long, respectively; a gravity-type concrete spillway 588 feet (179 m) long equipped with 12 tainter gates 26 feet by 40 feet in the channel; and a powerhouse on the South Carolina side of the river. Full power pool was designed to be 660 feet above mean sea level.

At this elevation, the reservoir would extend 7.1 miles (11.4 km) up the Savannah River to the confluence of the Tugaloo and Seneca Rivers; 41 miles up the Tugaloo to within approximately 2 miles of the existing Yonah Dam; 27 miles up the Seneca to the mouth of the Little River, South Carolina; 2 miles up the Little River to the Newry site; and 7 miles up the Keowee to the Old Pickens site. The reservoir would cover 56,500 acres and would involve the relocation of 3 sections of railroad totaling 2 miles, the raising of 2 railroad bridges, construction of 6 sections of new state high- ways, totaling 19.6 miles, and 9 sections of county roads totaling 12.7 miles; the construction of 9 new bridges and the raising of 4 existing bridges, and the relocation of 2 power transmission lines.

Construction of the Hartwell project took place from 1955 and was completed in 1963. Construction of the dam started in 1955 and was finished in 1959. Salvage archeological excavations were conducted at several sites in an effort to recover artifacts and information from prehistoric and historic sites that would be inundated by Lake Hartwell. Dr. Joseph Campbell led a team from the University of Georgia in this work, especially from 1957-1959.

Lake Hartwell is named for the American Revolutionary War figure Nancy Hart. Nancy Hart lived in the Georgia frontier, and was known for her devotion to freedom. A county, city, lake, state park and highway among others, bear her name.

1989 was the first year the lake hit a level 3, dropping to its lowest level during the drought that year. 2008 was the second time the lake hit a level 3. In December 2008, due to severe drought in the southeastern United States, the lake dropped to more than 22 feet (6.7 m) below its normal water level. This revealed old highways that were typically underwater, exposed islands that are usually topped with buoys to warn boaters, and left some boat shells sitting on dry land.

The area around Lake Hartwell has a rich history of indigenous settlement, dating to before the Mississippian culture period, which began about 800 CE. Numerous villages and platform mounds were built by people of that culture, along the upper tributaries of the Savannah River, such as the Chauga, Tugaloo, and Seneca rivers.

The Cherokee Indians settled throughout much of this Piedmont and mountainous area, declaring it their homeland. Initial relations with colonists were through trading, but after the Revolutionary War, European-American settlers increasingly encroached on Cherokee territory. They have since named many streams, rivers and recreation areas after the historic Cherokee and Muscogee Creek, who were among the Five Civilized Tribes removed from the Southeast under President Andrew Jackson in the 1830s.

Issaqueena, a young indigenous maiden who rode to Fort Ninety-Six to warn settlers of an attack, allegedly named some streams. Along her journey, she marked her travel by naming streams that she encountered for the number of miles she had covered. Issaqueena named Six-Mile, Twelve-Mile, Three-and-Twenty Mile and Six-and-Twenty Mile creeks, which are still a part of the lake today. Other historic figures who lived around this area were Andrew Pickens and John C. Calhoun, both statesmen from South Carolina. The botanist William Bartram traveled the area recording vegetation types and plant species.

In late 1956 Clemson College objected to damage that would be done to its property as a result of the impounded water in the reservoir. For instance, plans would cause the flooding of their Memorial Stadium. After countless meetings, Clemson finally settled with the government, agreeing to two diversion dams to be built in the vicinity of Clemson College in order to rechannel the Seneca River around its property. 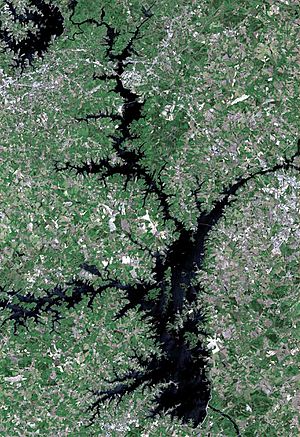 Since its construction, Hartwell Reservoir has provided good fishing habitat for many species. Bream, catfish, smallmouth bass, walleye, and largemouth bass are naturally occurring species in the lake, with quality fishing available for those species. The most popular fishing on Lake Hartwell, however, has been of striped bass. Striped Bass, also known as rock fish and normally a saltwater fish, were discovered able to survive in freshwater after the construction of a dam on the Santee-Cooper system in lower South Carolina trapped many striped bass in fresh water. Striped bass were eventually introduced to the three lower Savannah River System lakes: Hartwell, Russel, and Thurmond. Fish heavier than 60 pounds (27 kg) have been caught on Lake Hartwell, with 20 pounds (9.1 kg) fish being common. The majority of striped bass caught on the lake will range from 5 to 12 pounds (2.3 to 5.4 kg). 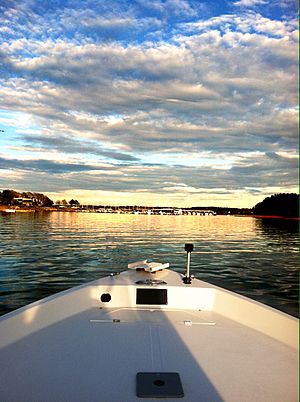 Sunset on the Lake with Portman Shoals Marina in the distance.

All content from Kiddle encyclopedia articles (including the article images and facts) can be freely used under Attribution-ShareAlike license, unless stated otherwise. Cite this article:
Lake Hartwell Facts for Kids. Kiddle Encyclopedia.