Clemson's 1,400 acre campus is located in the foothills of the Blue Ridge Mountains and sits next to Lake Hartwell. The university manages the nearby 17,500 acre Clemson Experimental Forest that is used for research, education, and recreation.

During The Great Depression student enrollment and income declined. The New Deal brought needed construction to campus under the Works Progress Administration with new dormitories to relieve the housing shortages. Long Hall, Sirrine Hall and the acquisition of 29,625 acres of privately owned farmland was acquired by Clemson through federal funding.

Agricultural engineers of Clemson diversified with the Clemson Agricultural Extension to educate farmers on soil conservation and crop storage techniques during The Great Depression. Robert Poole became the first Clemson alumni to be president in 1940. On September 19, 1942 Memorial Stadium was formally opened as the new stadium for the Clemson Tigers football team who previously played on Riggs Field since 1915.

During World War II Over 6,500 students were sent overseas. As a result of the Clemson ROTC around 5,850 were commissioned officers. The class of 1943 had a historical low of 343 graduates. By the end of the war 376 Clemson students had been killed in it.

In 1955 Clemson underwent a major restructuring and was transformed into "civilian" status for students and began admitting white women. In 1963, the school admitted its first African-American student, future Charlotte, North Carolina mayor Harvey Gantt. In 1964, the college was renamed Clemson University as the state legislature formally recognized the school's expanded academic offerings and research pursuits.

In July 1955, the four schools that made up Clemson ― Agriculture, Arts & Sciences, Engineering and Textiles ― were transformed into nine colleges: Architecture, Arts and Sciences, Liberal Arts, Sciences, Commerce and Industry, Education, Engineering, Forestry and Recreation Resources, and Nursing. This structure was used by the university until 1995 when the university's nine colleges were condensed into five: Agriculture, Forestry, and Life Sciences; Architecture, Arts, and Humanities; Business and Behavioral Science; Engineering and Science; Health, Education, and Human Development. As of July 14, 2014, the Eugene T. Moore School of Education broke off from the College of Health, Education, and Human development, thus becoming the sixth college.

The College of Agriculture, Forestry and Life Sciences (CAFLS) supports Clemson University's land-grant mission to provide education, research and service to the public. CAFLS faculty members teach major subjects and core curricula while preparing students to be leaders, creative thinkers, and communicators. Emphasis is placed on engaging students in research, internships/coops, study abroad, and service learning. CAFLS research is focused on the sustainability of agriculture, forests, and natural resources; food and packaging systems to ensure a healthy and safe food supply; and biomedical sciences to improve human and non-human health.

College of Architecture, Arts, and Humanities 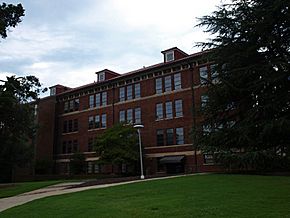 College of Business administration is at Sirrine Hall.

The College of Business is an Association to Advance Collegiate Schools of Business accredited college within the university specializing in business fields. Through high levels of interaction and collaboration between students, faculty, business and industry, non-profit centers, and civic and governmental agencies, the college nurtures individual development, bolsters entrepreneurial thinking, spurs social and economic prosperity, provides customized professional education, and sparks a lifelong desire for learning. 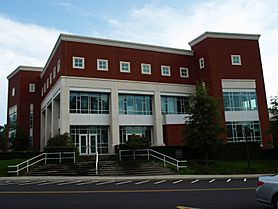 The College of Engineering, Computing and Applied Sciences specializes in engineering as well as the physical sciences such as physics and chemistry. Inspired by Thomas Green Clemson's dream to create a "high seminary of learning to benefit the agricultural and mechanical arts," engineering and sciences have been an integral part of the university's development. Since the first degrees were granted in 1896, Clemson engineers and scientists have made significant contributions to South Carolina, the nation and the world.

CoES was formed in 1995, joining the engineering disciplines with the chemistry, computer science, geological science, mathematical science, and physics and astronomy departments.

College of Health and Human Development

The College of Health and Human Development (HHD) teaching, research and service efforts focus on public health sciences, nursing, education, and parks, recreation and tourism management. Inspired by the motto "The Engaged College with a Personal Touch," the college's vision and mission are to create collaborative models that enhance community well-being and to prepare skilled professionals and creative leaders who build healthy, well-educated communities. 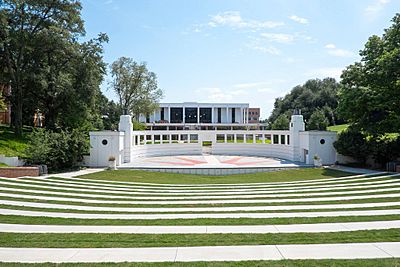 In addition to their varsity programs, Clemson offers a wide variety of intramural sports:

The university's fraternities and sororities system (or Greek system) is somewhat different from other large universities in the southern U.S. in that there are no Greek houses on campus, as interfraternity activity did not begin until 1970, following the abolishing of the military cadre requirements at the university. There are residence halls designated for fraternities and sororities, but there are no traditional Greek houses on campus.

Although the university became a coeducational civilian institution in 1955, it still maintains an active military presence. Cadets still participate during home football games, during which cadets hold the ropes as the team enters from the Hill, and they complete pushups for every Clemson point scored, just as the Tiger does.

The university is home to detachments for U.S. Army and U.S. Air Force Reserve Officers' Training Corps (ROTC) as well as a host school for the U.S. Marine Corps. 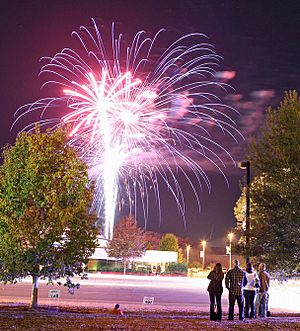 Clemson fans view a firework display after the conclusion of Tigerama.

The Tiger paw became the official logo for Clemson University in 1970, in place of the previous tiger logo. The change was inspired by President Robert Edwards to "upgrade the image of the university." The company tasked with creating the new logo contacted the Museum of Natural History in Chicago and requested a plaster imprint of a tiger paw. The paw is now used on all athletic teams and collegiate documents. The tiger paw is also painted on surfaces throughout campus and in footprint patterns on highways leading to the campus. 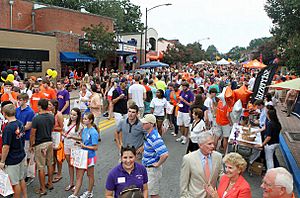 Clemson Welcome Back Festival in 2012

Every year Clemson students have the opportunity to attend Homecoming and Tigerama. The Clemson Homecoming tradition began in 1914 and has been held annually at Clemson University ever since. During homecoming week, various student organizations design and build Homecoming floats on Bowman Field. The floats are then revealed on the Saturday of the football game and judged by a select panel. Since 1957, Clemson has held "Tigerama" on the Friday night of homecoming week. Tigerama is one of the nation's largest student-run-pep rallies, averaging about 40,000 people. This Clemson event includes the crowning of Miss Homecoming, skits by various academic organizations, as well as a fireworks show.

Clemson University's Welcome Back Festival is held every year, on College Avenue in downtown Clemson, on the Monday after University housing opens. At the festival surrounding stores, businesses, and restaurants provide free gifts, merchandise, and samples to new and returning students. Performances are also held in the downtown area throughout the event, featuring various local artists and bands. The festival is sponsored by the Clemson Student Alumni Council, and the money raised benefits the Student Alumni Council Endowment Scholarship Fund, which has raised more than $38,000 for the scholarship fund. Over 10,000 students attended the 24th Annual Welcome Back Festival on August 20, 2012.

All content from Kiddle encyclopedia articles (including the article images and facts) can be freely used under Attribution-ShareAlike license, unless stated otherwise. Cite this article:
Clemson University Facts for Kids. Kiddle Encyclopedia.