Dodgeball is a sport played by throwing soft balls, or hard rubber balls, at people in a square court. The goal is to be the last one to be hit with the ball. Players may only throw balls at people who are not on their own team. If a player is hit by the ball, he or she should go to the outside of the court to the other team. From the outside, players throw the ball at players still on the inside.

Dodgeball is often played in elementary schools in physical education classes. Many school children play this game. In recent years, many adults who played it as children have formed adult leagues and clubs. Also, some schools have banned it (this means that made it against the rules to play it), because players can get hurt when playing the game. Tournaments are sometimes held in schools. 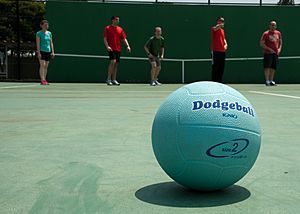 A dodgeball on a court, prior to the beginning of the match.

The number of dodgeballs used in the game often varies, but three to ten is common. Exceptions are usually made if a court is particularly small or if many people participate. More balls generally adds to the amount of action in a game, but can result in stalemate with many blocks. Six is the minimum number of balls to conduct a game with enforced rules. An odd number is generally favorable as one team will necessarily have a majority of balls in possession and should take the offensive role.

Dodgeball is played with many different types of dodgeballs. The three most used are Cloth, Foam and Rubber, however the Cloth ball is used across the widest spread of countries, with foam and rubber only used in North America and some Asian countries. 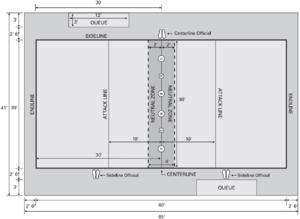 A typical dodgeball game is usually played on a basketball court, volleyball court, fenced area or even an Australian Rules Football oval or soccer pitch. There is no fixed dodgeball court design. The game is picked on the best available surface that is usually one of the above-mentioned. Unless it is a variation of dodgeball, the court must have a center line. 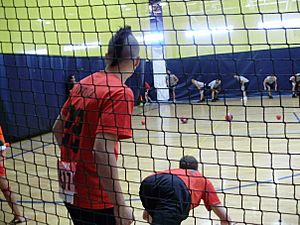 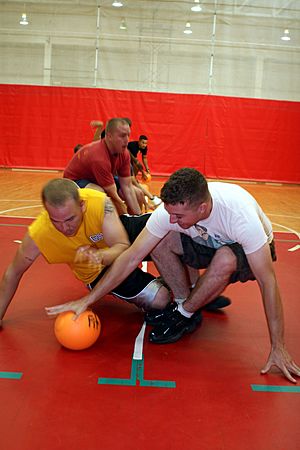 The opening rush of a dodgeball game.

At the beginning of a dodgeball game, the balls are lined up on the central dividing line (in some versions of the game, the balls are thrown in the air for the players to catch or divided evenly to both teams before a match). The players then simultaneously rush towards the center line and try to grab one of the dodgeballs and throw or roll it backwards to their teammates; players cannot pick up a ball and throw it instantly. In some versions there is a "check line" that the dodgeballs have to be behind before they can be considered "live." This is known as the opening rush. Once the game has commenced, players throw balls at members of the opposing team in an attempt to eliminate the players.

When a player has been hit by a dodgeball "on the full" (i.e. without hitting the roof, the floor, any of the walls, or an outside object and rebounding off) and no one catches it before it becomes dead, that player has been eliminated and must move to his team's designated bench area (players are still out if the ball rebounds off another dodgeball and/or player and hits them on the full). The same rule applies if any number of people try to catch the ball but drop it. Depending on the rules and variation, "headshots" (balls thrown in dodgeball that hit an opposing player in the head) may either result in the thrower being out, or the person being hit being out, or both.

Players can pick up dead balls and throw them back at the other team. Players are allowed to leave the confines of the court to gather balls that have rolled out of bounds, but cannot throw the ball until they are back inside the court. A ball thrown from outside the court cannot eliminate an opponent who is hit. It only succeeds in getting the thrower automatically eliminated. A player who moves completely out of bounds when a ball is thrown at them and does not catch that ball is also eliminated. If a player moves into the opponent's zone or picks up a ball from inside the opponent's zone without it fully rolling inside their zone, that player is out. Players can also get eliminated if their throw hits an opponent on the head, displays bad sportsmanship, or cheats. Kicking the balls is prohibited.

Depending on the rules of a particular game, a ball in the possession of a player can be used to block incoming balls thrown by the opposing team. Depending on the rules of the game being played, if a player gets a dodgeball knocked out of their hands from an opposition throw, or drops the dodgeball when it is used to deflect oncoming balls, the player is eliminated.

Once all players on either teams are eliminated, the game is over.

This will be in effect when there is a few players on each team: Alternate rule is ‘No Lines’ or open court. This rule is used at a point in the game when there are few players left and it is too easy to dodge the ball with all the extra room. When ‘No Lines’ is declared, all boundary lines no longer count and the players can go anywhere to get a better shot at their opponent.

All content from Kiddle encyclopedia articles (including the article images and facts) can be freely used under Attribution-ShareAlike license, unless stated otherwise. Cite this article:
Dodgeball Facts for Kids. Kiddle Encyclopedia.