Kids Encyclopedia Facts
This page is about the baseball variant. For the haircut, see Wiffle (hairstyle). For the measurement, see List of humorous units of measurement#Wiffle.
"Wiffle Ball" redirects here. For the video game, see Wiffle Ball (video game). 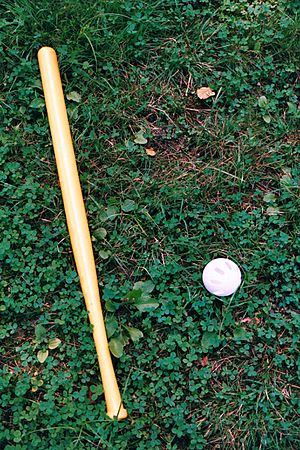 A Wiffle bat and ball

The game of Wiffle ball is a variation of baseball. The Wiffle ball is designed for indoor or outdoor play in confined areas. The game is played using a perforated, light-weight, resilient plastic ball and a long, typically yellow, plastic bat. 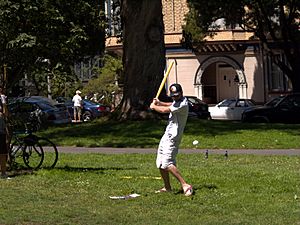 Wiffle ball being played in a park

The game became popular nationwide by the 1960s, and is played in backyards, on city streets, and on beaches. The game is similar to baseball, and is designed for 2–10 players. A single game of Wiffle ball consists of 7 innings or 60 minutes whichever is earliest. 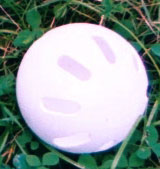 A wiffle ball, showing the perforated half, which allows for easy curvature while pitching.

Tournaments have been the driving force in modern wiffle ball and have been held in the United States and Europe since 1977. That year, Rick Ferroli began holding tournaments in his backyard tribute to Fenway Park in Hanover, Massachusetts. In 1980, the World Wiffle Ball Championship was established in Mishawaka, Indiana by Jim Bottorff and Larry Grau. With the explosion of the Internet in the 1990s, there are now hundreds of Wiffle ball tournaments played in the United States, most in the same place every year, with a few tournament "circuits". The World Wiffle Ball Championship remains the oldest tournament in the nation, having moved to the Chicago suburbs in 2013, after introducing regional stops over three decades in Baltimore; Los Angeles; Indianapolis; Eugene, Oregon; and Barcelona, Spain. The tournament is featured at #27 in the book, "101 Baseball Places to Visit Before You Strike Out."

There is a national fast pitch tournament every summer held in Morenci, Michigan as well. This tournament determines which league is the best in the country. It is called the NWLA Tournament.

The first United Wiffle National Championship Tournament was held at PeoplesBank Park in York, Pennsylvania in 2020.

Some wiffle ball players have built fields to resemble major league ballparks. Thomas P. Hannon, Jr. authored a book, Backyard Ball, on his experiences building a smaller version of Ebbets Field. Patrick M. O'Connor wrote a book, Little Fenway, about building his versions of Fenway Park and Wrigley Field. But not all wiffle ball fields have been modeled from major league ball parks. Some have created original fields, Strawberry Field in Encino, California being the most exquisite. Rick Messina spent over $700,000 constructing Strawberry Field, which features lights for night games, bleachers, and a press box. He also converted a neighboring house into a clubhouse/pub.

Building fields can lead to controversy and legal issues. In 2008, The New York Times published an article about Greenwich, Connecticut teenagers who were forced by the city to tear down a wiffle ball field they had built because of neighbor complaints.

All content from Kiddle encyclopedia articles (including the article images and facts) can be freely used under Attribution-ShareAlike license, unless stated otherwise. Cite this article:
Wiffle ball Facts for Kids. Kiddle Encyclopedia.